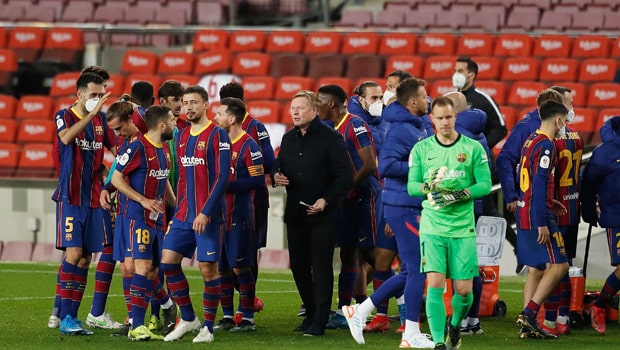 Barcelona manager Ronald Koeman has called for a total overhaul of his team ahead of the 2021/2022 La Liga season after the team ended third in the 2020/2021 season.

Barcelona dropped out of the title race in the second to the final game of the season after losing 2-1 to Celta Vigo at the Camp Nou.

However, the team ended the season with a 1-0 victory over Eibar courtesy of an 81st-minute strike from French striker Antoine Griezmann.

The Dutch manager explained that the current team isn’t up to the level needed for Barcelona hunting that the project isn’t done and more young players need to be trusted.

“For me, this squad is not made to have the level that it demands and that we want for Barcelona. There are older players with all due respect. And there are young players who have to gain more experience to be better. The project is not done, in one season you can not do everything,” Koeman said.

Meanwhile, Atletico Madrid finished as Champions of the La Liga 2020/2021 season after a comeback victory over Real Valladolid who was confirmed relegated by the virtue of the result.

Oscar Plano gave the home side the lead in the first 20 minutes of the game but Atletico Madrid got into the game.

However, Angel Correa equalized for Diego Simeone’s side just three minutes before the hour mark while Luis Suarez scored in the 67th minute of the game as the capital club saw off a difficult season.

Zinedine Zidane’s men fell behind when Yeremi Pink put the Yellow Submarines ahead in the 20th minute, Karim Benzema and Luka Modric scored two late goals to give Real Madrid all three points.