Posted by OLADIPUPO MOJEED on November 25, 2021 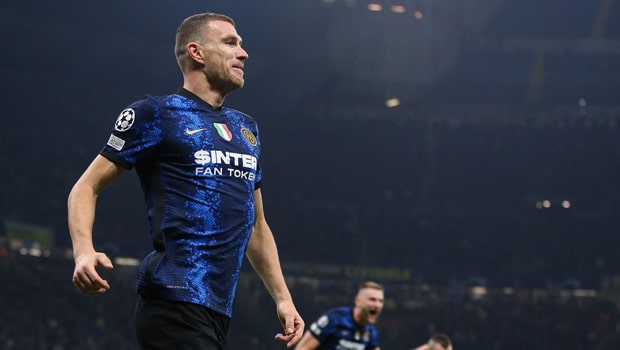 Inter Milan have qualified for the knockout stage of the UEFA Champions League after recording a 2-0 win over Ukrainian champion, Shakhtar Donetsk.

In the match in which the first interval was goalless, the defending Serie A champions finally secured the ticket when Edin Dzeko bagged a brace which proved to be crucial.

Having struggled at the beginning of their European campaign, the Nerazzurri needed a win to guarantee passage to the Round of 16 for the first time in a decade provided Real Madrid didn’t lose to Sheriff.

Inter didn’t; allow the last two results with the Ukrainian team to repeat itself. They showed enormous intent that saw them hit the post three times.

Via their aggressive start, Nicolò Barella fired the ball over when off balance. The young lad later set up Lautaro Martinez with a dummy but the two shots were charged down by Maycon.

Inter pressure almost paid off when Ivan Perisic scored. But the goal was cancelled for the earlier Matteo Darmian offside position.

Before getting his brace, Dzeko was initially stopped at Anatolii Trubin from point-blank range. The Bosnian got another chance with a header. The ball was palmed off the line.

Martinez thought he opened the goal account when the ball was in the net on 57 minutes with a well-taken volley.

Dzeko finally registered his name on the goal sheet along. Darmian’s shot was charged down and fell into the path of Dzeko who made no mistake from that point to score.

Within 5 minutes Inter doubled the lead through Deko with a header again from a move that began from Ivan Perisic.  The Croatian floated a cross to the back post for the Bosnian’s header from a couple of yards.

Despite their fightback, Shakhtar Donetsk couldn’t reduce the deficit.

Inter have now followed Bayern Munich, and Chelsea to book the last 16 spot in the prestigious tournament.