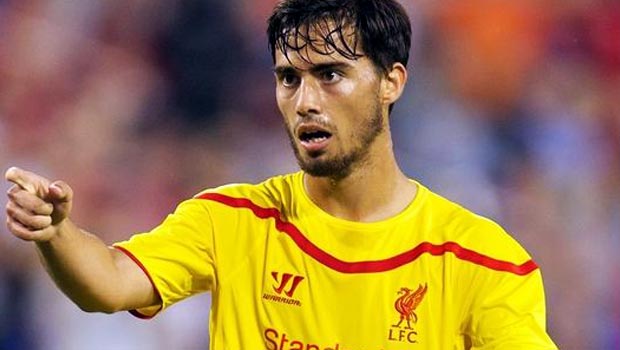 Liverpool midfielder Suso has agreed a four-year contract with AC Milan and will join the Italian giants in July when his current deal at Anfield expires.

The Spaniard has failed to force his way into boss Brendan Rodgers’ first-team plans on a regular basis and had been a long-term target for Milan.

Reports of a switch to the Serie A side this month circulated last week but Milan were quick to point out the 21-year-old would only be moving to the San Siro at the end of the season and now Suso has confirmed that will be the case.

The youngster had a medical over the weekend and will be heading to Italy in the summer.

“I am very happy to be coming to Milan,” he told Sky Sport Italia. “I haven’t spoken to coach (Pippo) Inzaghi yet. I came here for the edical and hope it all went well.

“Do I have a message for the Milan fans? I am not here for long then we’ll see when I am able to play.”

Suso has played just 14 times for the Reds in the Premier League and has not featured this season since scoring against Middlesbrough in the Capital One Cup win back in September, although he has been sidelined for several months with a groin injury he suffered at the start of October.

Meanwhile, winger Oussama Assaidi has returned to Liverpool temporarily after his season-long loan deal at Stoke was cut short to facilitate a move to Dubai-based Al-Ahli.

The Morocco international, who has failed to make the grade at Anfield, is set for a £4.7million permanent move that should be completed in the next few days.