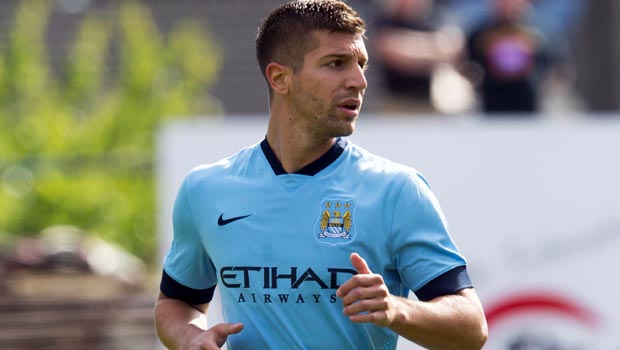 Schalke have signed Manchester City defender Matija Nastasic on loan for the rest of the season with a view to a permanent deal in the summer.

The centre-back has fallen out of favour at the Etihad Stadium under Manuel Pellegrini and has only made one senior appearance for City this season – in the Community Shield defeat to Arsenal in August.

He was clearly behind Vincent Kompany, Eliaquim Mangala and Martin Demichelis in the pecking order and has been allowed to move on with his brief Premier League career looking over.

He has joined Bundesliga side Schalke, who are managed by former Chelsea manager Roberto Di Matteo, and if he impresses it is thought a permanent switch will be agreed between the two clubs at the end of the season.

“Schalke have now agreed with Manchester City the final details of a loan for Matija Nastasic subject to a medical,” a statement on the club’s website read.

The 21-year-old joined City from Fiorentina in 2012 and was a regular at the back under former manager Roberto Mancini but he was used sparingly by Pellegrini last season, making just 11 Premier League starts, and he’s been completely out of favour this term.

The Serbian will hope for regular first-team action for Schalke, who sit fifth in the Bundesliga, when the action there resumes following the winter break at the end of January.

Di Matteo’s side are one of three teams locked on 27 points and they will hope to mount a serious bid for a Champions League place in the second half of the season, while they host reigning European champions Real Madrid in the first leg of their last-16 tie in the competition next month (Schalke 7.48, Real 1.34, draw 5.00 – Match prices).