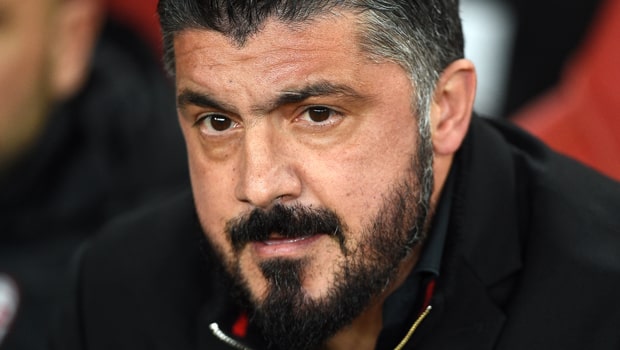 Gennaro Gattuso felt AC Milan got exactly what they deserved after they were knocked out of the Europa League following Thursday’s 3-1 defeat to Olympiakos.

The Rossoneri went into the match in Greece knowing a point or a one-goal defeat would be enough to see them squeeze through to the knockout stages.

However, their qualification looked in jeopardy when Pape Abou Cisse and an own goal from Cristian Zapata put Olympiakos 2-0 up on the night.

Zapata then managed to pull a goal back for Milan and that would have been enough to see the Serie A giants through, but they then conceded a penalty inside the final 10 minutes, which was converted by Konstantinos Fortounis to seal the Greek side their place in the knockout stages.

Gattuso had no real complaints as he felt his side deserved to be eliminated after they failed to take their chances and made unnecessary mistakes.

“We gifted the game,” Gattuso told Sky Sport Italia. “I am furious because we could’ve been stronger even than all the incidents and emerged with qualification.

“We had the game in hand, but when creating eight scoring opportunities in a stadium like this and then falling apart the moment things go wrong, you deserve to go out.

“We’ve shown we are still not good enough to get the game on track when we have the chance.”

Milan must now shift their focus back to domestic action, with a trip to Bologna to come in Serie A on Tuesday.

Gattuso’s men, who currently sit fourth in the Italian top flight, are priced at 1.91 to win that match, while struggling Bologna are available at 4.33 and the draw is on offer at 3.40.