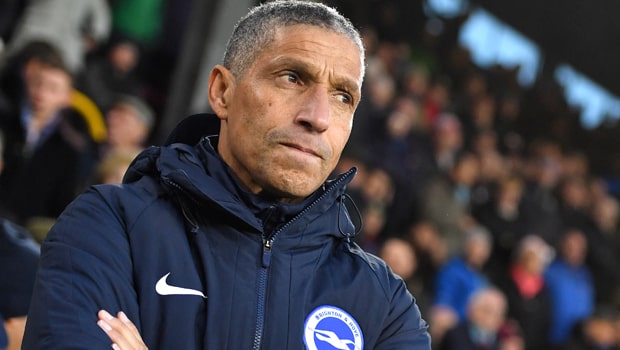 Brighton boss Chris Hughton remains content with the form his team are in right now although he admits facing Chelsea on Sunday will be a reminder of how tough Premier League football can be.

The Seagulls enter the weekend 13th in the table, with a healthy six wins from their 16 games so far.

Hughton felt they were unfortunate not to come away with a point in last week’s 1-0 reverse at Burnley, but he was upbeat overall.

“Our level of performance at the moment is good – I thought we were unfortunate not to get anything from last weekend,” said Hughton.

“That’s important because we have some tough matches coming up – you have to be in those games.

“You have to be part of a good defensive unit, as well as standing up to the challenge individually on Sunday.”

Chelsea beat Brighton home and away last season, scoring six goals without reply, with the Blues comfortable 4-0 winners at the Amex Stadium.

Last weekend’s defeat of champions Manchester City was a reminder of the quality Chelsea have and Hughton feels they’ve settled into Maurizio Sarri’s way of playing.

“They have adapted very well (to new manager). Any team that beats Manchester City at the moment shows the quality they’ve got,” he added.

“Chelsea were very good at the Amex last year – whichever way they do play they have real quality and their last league win shows that.

“Chelsea reminded us of the levels of this league last season.” Brighton are 7.50 to beat Chelsea on Sunday, the Blues are 1.44, while the draw is 4.33.