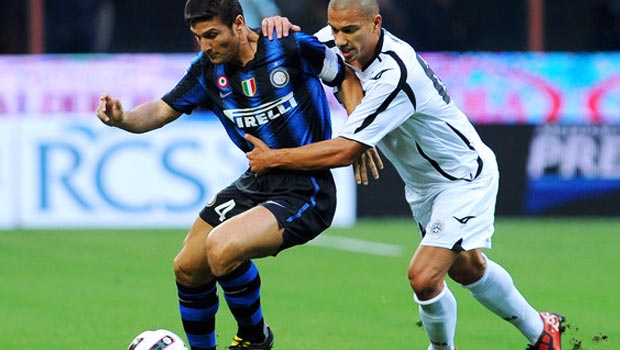 Having hit the woodwork four times in Sunday’s last-gasp 1-0 defeat against Atalanta, goal-shy Inter Milan will be hoping for better luck at the San Siro tonight when they host Udinese.

Inter took care of business at the Stadio Fruili running out 3-0 winners earlier in the season, and such a return in front of goal tonight would be most welcome for a side that has particularly struggled to score at home.

A tally of 21 goals from 15 matches is an all-time low at this stage of the season for the Nerazzurri, who have managed to find the back of the net just six times in the last seven outings at the San Siro.

With their Champions League qualification hopes hanging by a thread, sixth-placed Inter will look to 21-year-old Argentinian striker Mauro Icardi to deliver the goods tonight.

Since offloading some of the responsibility on the shoulders of former lone striker Rodrigo Palacio, Icardi has managed four goals from his four starts and 10 bench appearances.

And with club president Erick Thohir confirming his interest in strikers Fernando Torres (Chelsea), Edin Dzeko (Manchester City) and Alvaro Morata (Real Madrid) as transfer targets for next season, the former Sampdoria front man has an added incentive to make an impact in the remaining nine games of the season.

Given Inter’s lack of potency up front and Udinese’s record of five wins in the last seven meetings, the Zebrette’s, currently 14th in the Serie A table, will fancy their chances of coming away from Milan with something to show for their efforts.

Indeed, the head-to-head records of the respective coaches, when they have faced each other in the past, suggests a tight game could be on the cards.

In 16 previous competitive clashes, there have been five wins apiece for Inter’s Walter Mazzarri and Udinese boss Francesco Guidolin and five draws. A draw tonight is priced at 3.55.