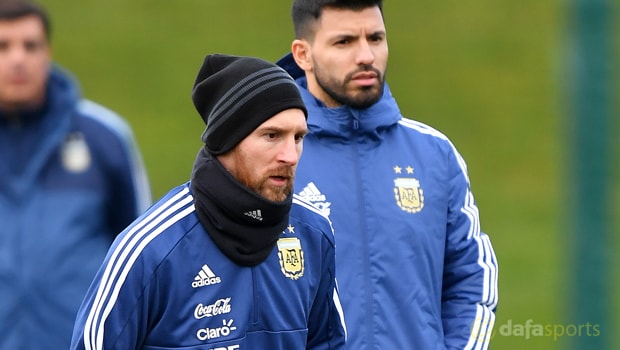 Sergio Aguero has ruled out playing alongside Barcelona’s Lionel Messi at club level, with the Manchester City forward saying both players will be staying put this summer.

Aguero has been a mainstay in City’s side since moving to the Etihad Stadium from Atletico Madrid in 2011, scoring 143 Premier League goals from 206 appearances.

The 29-year-old, who has a deal until the summer of 2020, is the club’s record goalscorer and has helped the Citizens win three league titles since his arrival.

Five-time Ballon d’Or winner Messi, a one-club man, is a legend of the game and he has been breaking all sorts of records since making his debut for Barcelona back in 2004.

The 30-year-old has won trophy after trophy, including four Champions League titles, and has scored an incredible 383 La Liga goals from just 417 matches.

Many have dreamt about a possible forward partnership of Aguero and Messi at club level and the reigning English champions have long been credited with an interest in the Catalans’ superstar.

However, it appears the Argentine duo will only play together on the international stage after the City talisman revealed both players will remain where they are this summer.

Aguero told TyC Sports: “Sincerely, before there was that possibility. It is now a question of age for both him and for me. He is going to stay at Barcelona, where he’s playing well, and I’ll do so at City.”

Pep Guardiola’s men, who are still searching for a first triumph in the Champions League, are firm 1.67 favourites to defend their Premier League crown next season.

Barcelona are in action on Sunday as they welcome Real Sociedad to the Camp Nou for the final game of the season and the hosts are 1.25 favourites to win, a draw is priced at 6.50 whilst the visitors are 9.00 outsiders.