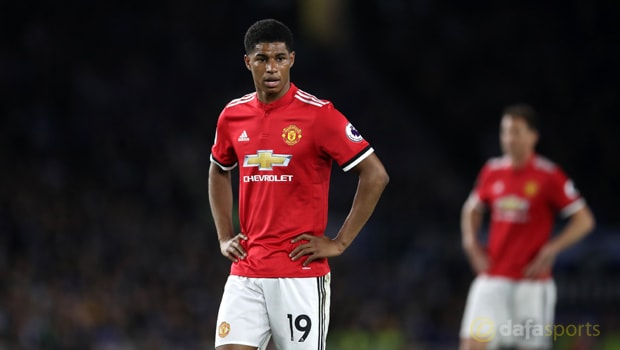 Andy Cole says Marcus Rashford deserves to feel frustrated by his lack of opportunities for Manchester United this season but the former Red Devil has urged the youngster not to let his head drop.

England international Rashford, who has been included in Gareth Southgate’s 23-man squad for the 2018 World Cup in Russia, has cut a frustrated figure this season after seeing limited time on the pitch.

The 20-year-old has struggled to cement down a regular spot under manager Jose Mourinho and the forward did not start a single Premier League game between the Boxing Day draw with Burnley and the win over Liverpool on March 10.

In total, the Wythenshawe-born star, who made his senior debut for United back in 2015, has started just 17 league games this term although he has managed to score seven goals.

Rashford is pushing for a start for Saturday’s FA Cup final against Chelsea at Wembley and Mourinho’s men are narrow 2.60 favourites to win in 90 minutes, a draw is priced at 3.10 whilst the Blues are a 2.88 chance.

Cole, who scored 93 league goals from 195 appearances during his time at Old Trafford, has sympathised with his compatriot for a tough campaign although the 46-year-old has provided some words of wisdom.

“It’s been a sticky one for him this season, it really has,” he was quoted as saying by Sky Sports.

“(He’s had) not as many minutes as he would have liked. With Marcus, he has to focus his mind on learning and improving and wanting to become a better player.

“Sometimes when you don’t get minutes your mind goes elsewhere because you’re worried about getting minutes.

Then, when you do come on, it’s difficult to try and get into a game or when you start you put yourself under massive pressure.

“If he’s prepared to learn and work on the things that got him into the team in the first place, he’ll be okay. You’ve got to still want to learn, still want to improve.”