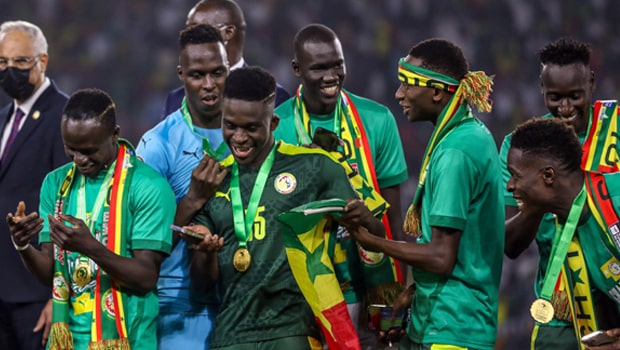 Liverpool forward Sadio Mane scored the winning penalty on Sunday in Cameroon as the Teranga Lions of Senegal won their first-ever African Cup of Nations title.

Before this edition, the Teranga Lions had featured in the final of the AFCON twice previously, with the most recent being in 2019 when they lost to Algeria and also in 2002.

Senegal should have gone ahead in the encounter when they awarded a penalty in the first ten minutes, but Sadio Mane’s spot-kick was saved by the Egyptian goalkeeper Gabaski.

Gabaski was also in the huge form to deny Senegal on several occasions in regular and extra time. Edouard Mendy was also tested late in extra-time, but Egypt couldn’t find a way to win as they sealed a third penalty shootout in the knockout stages.

After scoring each other’s opening spot-kick, Gabaski saved his fifth penalty of the shootouts Egypt have played in the knockout stage when he stopped Bouna Sarr. This was after Mohamed Abdelmonem saw his penalty hit the left-hand upright and bounce away.

Edouard Mendy then saved from Lasheen allowing Sadio Mane to win it for Senegal with his kick. It’s the first time Egypt lose a penalty shootout in Cameroon after knocking out Ivory Coast and the hosts in the quarter-finals and semifinals.

Meanwhile, Senegal has become the 15th team to win the title, but they will still face the Pharaohs in a World Cup playoffs in March.

After the celebration, Egyptian goalkeeper Gabaski was named man of the final match,. while Senegal’s Edouard Mendy won the goalkeeper of the tournament.

Senegal’s Sadio Mane won the player of the tournament while Vincent Aboubakar emerged the top scorer after scoring 8 goals in the tournament. The Indomitable Lions of Cameroon won the third-place match against Burkina Faso after a thrilling 3-3 draw after 90 minutes on Saturday.