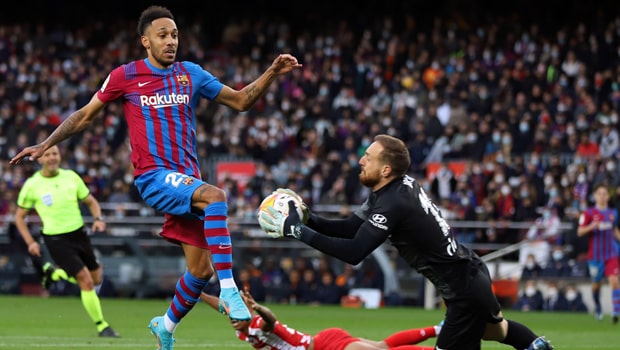 Former Arsenal striker Pierre Emerick Aubameyang and Adama Traore made their debut for Barcelona in their impressive 4-2 win over Atletico Madrid.

Aubameyang and Adama Traore joined Barcelona before the end of the January transfer window, but it was former Wolves winger Traore who started while Aubameyang joined as a second-half substitute.

Barcelona fell behind as early as the 8th minute through Yannick Carrasco, but Jordi Alba equalised two minutes later.

Barcelona then led when Gavi scored in the 21st minute off a Traore’s assist while Ronald Araujo made it 3-1.

Meanwhile, Daniel Alves scored immediately after the restart with a low shot to ensure the victory for Barcelona, although former Barcelona striker Luis Suarez scored in the 58th minute to half the deficit.

Alves was sent off in the 69th minutes but Barcelona were able to hold on for a 4-2 victory. Irrespective, it was an impressive night for the ageless Brazilian as he becomes the first Barcelona player to score, assist, and be sent off in a La Liga game since at least 2004-05.

However, they had to settle for a loan with an option to buy for Adama Traore. The forward, who is returning to the Camp Nou after emerging as an academy talent, impressed in the first half and even provided the cross for Gavi to head in.

Barcelona have now moved into the top four of the La Liga table sitting in the fourth position with 38 points from 22 games, two more than Atletico Madrid in fifth and nine points behind second-placed Sevilla, who have played a game more than Xavi’s Barcelona.