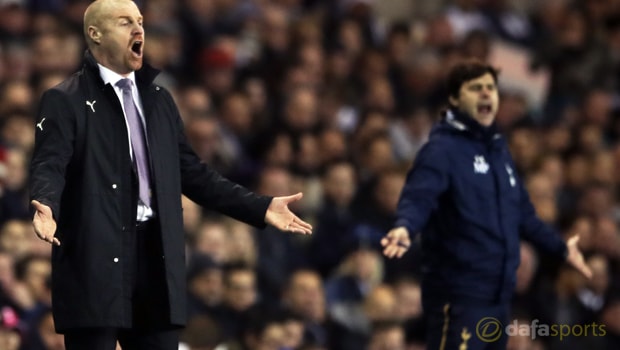 Sean Dyche feels there are positive signs in Burnley’s away form despite a fourth straight loss on the road.

The Clarets went down 2-1 at Spurs on Sunday and haven’t earned a point away from Turf Moor since their battling stalemate at Old Trafford in late October.

Burnley also went down by an odd goal against West Ham in midweek and Dyche has seen enough in recent weeks to suggest his side are going in the right direction.

“We’re being more proactive, that’s the key thing,” he said. “The last three away performances have been much better and we’ve looked like a side that wants to take on the game.

“I’ve been really pleased with that, particularly [against Spurs], but it’s just been that we’re taking a few knocks at the moment and its coming in the form of decisions so we can only hope that our honesty doesn’t cost us.”

Dyche was referring to the decision of referee Kevin Friend not to issue a red card to Spurs sub Moussa Sissoko for a challenge on Stephen Ward.

The Burnley boss felt that Sissoko should have been ordered off for what a dangerous tackle and his misery was completed when the French ace then set up Danny Rose to score Spurs’ winning goal.

“It’s a poor challenge. He’s got to go off,” he said. “We can’t really land a big decision at the moment we’re hoping that will turn and that player, who in my opinion should be off the field of play, then sets up their goal.”

Burnley have back-to-back home games to look forward to over Christmas, with Middlesbrough and Sunderland coming to visit. The Clarets are 2.80 to beat ‘Boro on Boxing Day, with Aitor Karanka’s side 2.60 and the draw 3.10.