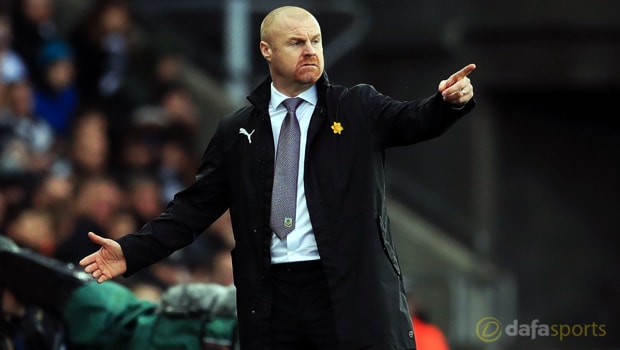 Sean Dyche had no doubts that his Burnley side should have returned from South Wales with a point after Saturday’s clash with Swansea.

The Clarets trailed to an early goal from Fernando Llorente but Andre Gray turned the game around, scoring from the penalty spot after 20 minutes and giving Burnley the lead just beyond the hour mark.

The lead lasted only eight minutes before Martin Olsson levelled and it seemed set to end that way before Llorente popped up with the winner in stoppage time.

The Spanish forward rose above Ben Mee in the air to connect with Jack Cork’s cross and ensure the Swans took all three points.

It was a cruel late blow on Burnley and, more importantly, one that Dyche felt should not have been allowed to stand by referee Anthony Taylor.

“The decision on the final goal was a foul on Ben Mee, it’s as simple as that,” he told reporters.

“I was very disappointed to have that goal given against us. Llorente pushed him in the back and gave him a free header so we’re disappointed in the end.”

Dyche was however less assured when it came to the controversial first-half penalty award that allowed Gray to restore parity.

Taylor pointed to the spot following a corner but replays clearly showed the ball was handled by Burnley’s Sam Vokes and not a Swansea defender.

Regardless of whether it was right or wrong, Dyche insisted the referee shouldn’t seek to balance out decisions.

“The referee’s job is not to level things out, it is to give the decision that is obvious and I thought it was an obvious foul,” he said.

“To be fair it may have been a penalty or it might not have been.” Burnley are 13.00 to win away at Liverpool on Sunday.