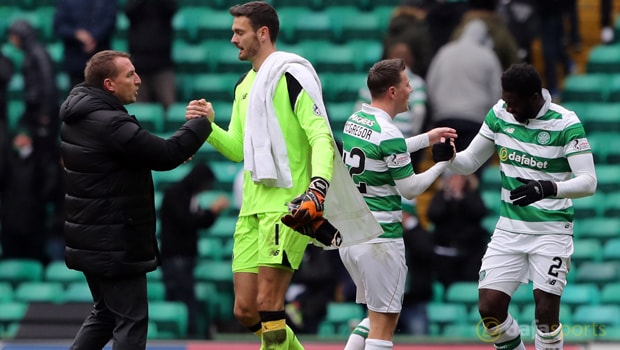 Celtic have been drawn to face Glasgow rivals Rangers in the Scottish Cup semi-finals next month.

They will meet at Hampden Park on April 22/23 in a repeat of last year’s semi-final, which Rangers won on penalties following a 2-2 draw.

In the other last-four tie, cup holders Hibernian will face Aberdeen. All four teams came through home quarter-finals at the weekend.

Rangers had little trouble as they eased past Hamilton with a 6-0 win at Ibrox on Saturday, ahead of Hibs beating Ayr United 3-1 at Easter Road.

On Sunday, Celtic were forced to come from a goal down at half time as they got past St Mirren 4-1 to preserve their unbeaten domestic record under manager Brendan Rodgers and stay on course for a first treble since 2001.

Aberdeen meanwhile edged out 10-man Partick Thistle at Pittodrie thanks to an early goal from Graham Shinnie.

The semi-final draw means that Rangers, currently managerless, will get the opportunity to try and end both the unbeaten run of Rodgers’ Celtic and their treble quest.

The Light Blues cross Glasgow this Sunday to face the runaway Premiership leaders on league duty.

Celtic have beaten Rangers in all three meetings this season.

Moussa Dembele netted a hat-trick in a 5-1 demolition at Parkhead in September while the same player scored the only goal in a League Cup victory at Hampden Park in October.

Rangers led at Ibrox on New Year’s Eve but goals from Dembele and Scott Sinclair turned the game around for the Hoops.