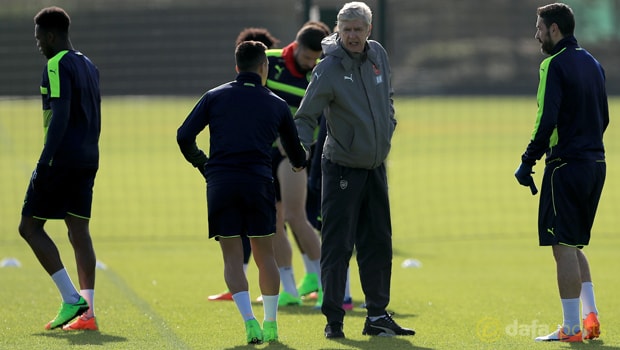 Arsene Wenger has quashed any suggestions that he had a fall out with Alexis Sanchez prior to Saturday’s defeat against Liverpool.

The Chilean was benched for the 3-1 loss at Anfield, with Wenger declaring it was a purely a tactical move at the time.

The loss against Jurgen Klopp’s side saw Arsenal drop out of the Premier League’s top four and Wenger feels the widespread media reports suggesting he had fallen out with Sanchez was a mere reflection that the press needed something to write about.

Wenger and Sanchez were pictured shaking hands at Arsenal’s Monday morning training session ahead of their Champions League game against Bayern Munich this week.

Speaking to the media afterwards, Wenger clarified his position and denied any problem exists between Sanchez and himself.

“When you don’t win the games, it’s not always down to real stories and we have to accept that.”

The latest reports will only serve to heighten rumours that the former Barcelona forward could head for pastures new this summer but Wenger has reiterated that Sanchez is a pleasure to work with.

“I explained after the game at Liverpool that I decided to go for a more direct option in the game and that’s what happened. That was the unique reason for my decision,” he added.

“For the rest, his attitude… He is a committed player, sometimes with excessive behaviour, but you have seen that many times in history in every squad.”

Arsenal are 3.20 to beat Bayern on Tuesday, with Sanchez 6.50 to score the opening goal.