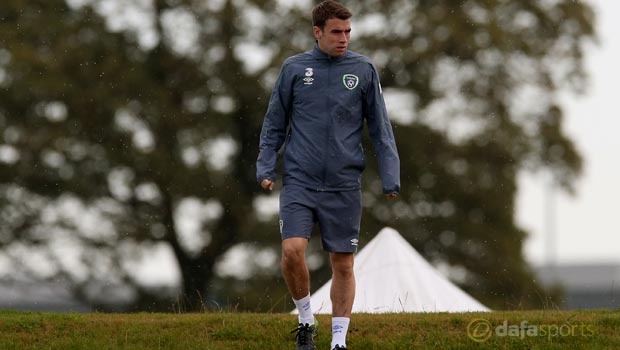 Everton’s Seamus Coleman says the Republic of Ireland will not dwell on their failed bid to secure automatic qualification for next summer’s Euro 2016 Finals in France.

The Irish slipped to a 2-1 defeat against Poland in Warsaw on Sunday that saw them finish third in Group D, earning a spot in next month’s playoffs as a result.

Coleman, who returned from injury in Warsaw and is expected to be fit when the Toffees host Manchester United on Saturday, says this is no time to feel sorry for themselves and wants instead to be positive about earning a playoff spot.

The full-back said there was a feeling of disappointment in Poland after the high of defeating world champions Germany in Dublin on Thursday.

“We let ourselves down a little bit and fair play to Poland, they got there in the end,” he said.

“We’ve got a big month next month and we will have to pick ourselves right back up again.”

The Irish were embroiled in a tense battle with Scotland for much of the qualification campaign to take third spot behind Germany and Poland.

Having taken just one point from six against Gordon Strachan’s side, Coleman admits the playoff place is something Ireland should savour.

“There were periods throughout the group that we would pick this play-off place, so you have to look at the positives straight away and move on.

“We’ve got to get going again,” he said.

Coleman hasn’t featured in any of Everton‘s last three Premier League games as he recovered from a hamstring injury sustained in the 3-1 win over Chelsea in early September. Having played 90 minutes for Ireland, he will hope to force his way back into Roberto Martinez’s team for the game against Man United.

Everton are 3.30 to beat Manchester United at Goodison Park on Saturday. The draw is 3.40 while Louis van Gaal’s team are 2.20.