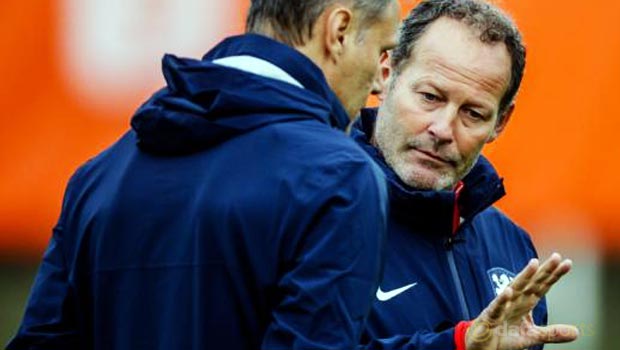 The Netherlands face the prospect of missing out on the European Championship Finals for the first time since 1984 ahead of their final qualifier against Czech Republic in Amsterdam.

Danny Blind’s side go into the final round of games in Group A in fourth place, knowing they must beat the Czech Republic and hope third-placed Turkey lose against Iceland just to secure a play-off place.

Iceland and Czech Republic have already booked their passages to France next summer by guaranteeing the top two spots.

Blind took control of the Dutch bid in July after a poor start to qualifying led Guus Hiddink to walk away from the team that had finished third in the World Cup in Brazil under Louis van Gaal.

Further defeats to Iceland and Turkey leave the Netherlands on the brink of failing to qualify for a major tournament for the first time since the 2002 World Cup, in spite of a weekend win over Kazakhstan.

Blind says they must concentrate on beating the Czech’s and hope that other results go in their favour.

“We are still alive and that’s what we must focus on,” said Blind.

The Netherlands have lost four of nine games to date in this campaign, with the back-to-back reversals against Iceland and Turkey in September ending their hopes of automatic qualification.

The win over Kazakhstan was overshadowed somewhat by Turkey’s 2-0 against the Czech’s in Prague.

That result, Blind says, was another crushing blow to his squad but they are not giving up hope of escaping from what is a perilous position.

“That was a big disappointment for us,” added Blind.

“It’s actually the same situation that we had before Saturday’s matches but this is our last chance.”

The Netherlands are 1.44 to defeat the Czech Republic, while Blind’s team are 2.15 to win the game to nil.