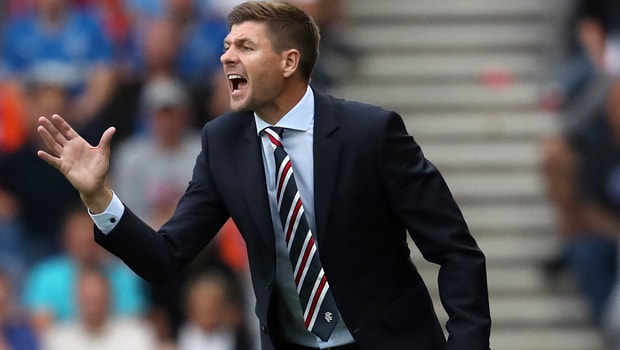 Rangers manager Steven Gerrard was fulsome in his praise for new faces Ryan Kent and Lassana Coulibaly after watching his side claim a valuable 1-0 Europa League away win against NK Osijek.

It was a third successive clean sheet for Gerrard’s men in their qualifying campaign and sets them up nicely for the return game in Glasgow.

Rangers had to ride their luck at times but the Light Blues held on for their first away triumph in Europe since beating Sporting Lisbon on their way to the 2008 UEFA Cup final.

Coulibaly and Kent earned their stripes in their first starts as Rangers players.

“Lassana was majestic, he covered every blade of grass, he won tackles, he broke play up,” Gerrard said.

“That’s his first 90 minutes, can you imagine what he’s going to be like after five, six games?

“Ryan played only two 45 minutes in friendly games, he’s still got another level to go to but he looked dangerous and the supporters can see what kind of player he’s going to be.”

Alfredo Morelos scored the crucial away goal before the 20-minute mark.

Morelos had been warned by his boss that he had better rediscover his killer touch if he wanted to hold onto his starting berth and the ex-Liverpool skipper was delighted with what the 22-year-old forward offered him.

“[Morelos’s] application and work rate in training on and off the pitch has been tremendous. He got his reward for that,” Gerrard added.

“His performance was selfless, and the defenders and goalkeeper are thanking him for the shift he put in for us. He should be proud of himself.”