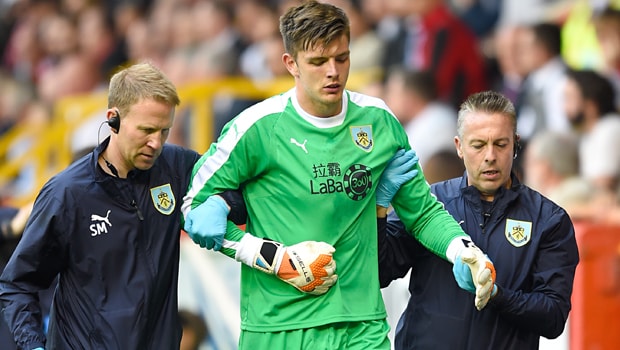 Burnley goalkeeper Nick Pope looks to have suffered a ‘serious’ shoulder injury in the 1-1 Europa League draw with Aberdeen, according to Clarets boss Sean Dyche.

Pope was taken off just before the quarter-hour of the second-round qualifier first leg at Pittodrie after appearing to collide with team-mate James Tarkowski.

The goalkeeper, who was in the England squad for this summer’s World Cup in Russia, was taken to hospital in Scotland and his manager is concerned.

“We’ll have to wait and see but it looks to be more serious, rather than not serious.”

The Scottish Premiership side went in front not long after Pope’s departure, with Gary Mackay-Steven converting a penalty.

Dyche was not convinced on the spot-kick award, while he also revealed Burnley aren’t getting much luck with penalties.

“We haven’t had one in over a calendar year. I don’t know how much contact there was, it didn’t look like a lot,” he added.

Dyche was happy with a 1-1 scoreline to take back to Turf Moor for the second leg. For such an early season encounter, he felt the clash with Derek McInnes’ outfit was full-blooded and enjoyable.

“When you think about how the game panned out, you take the away goal and the draw,” said Dyche.

“I think we deserved to edge it but not I’m not remotely taking anything away from an Aberdeen side that certainly made it a proper game.

“The atmosphere was great, fans of both sides were excellent and it felt like a real, real game. So absolute credit to Aberdeen for that.”

Burnley are 4.00 to win their first Premier League game away at Southampton next month. The Saints are favourites at 1.95 while the draw is 3.40.