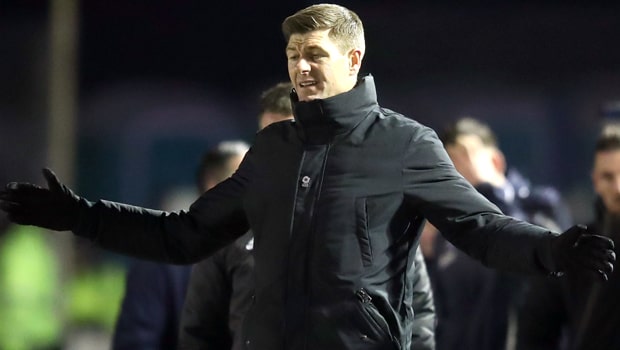 Rangers manager Steven Gerrard says Steve Clarke is “trying to get one of my players banned” after comments the Kilmarnock boss made about Jermain Defoe.

Defoe went down under Paul McGinn’s challenge to win one of four Rangers penalties against St Mirren on Saturday, with Clarke suggesting on Monday that he felt it was a dive.

Clarke said he wants to see “consistency” from the Scottish FA after Killie winger Jordan Jones was given a two-game ban for diving earlier in the season.

Referee Andrew Dallas saw fit to award Rangers a penalty in the game and Gerrard does not believe a rival manager should be seeking to have his player banned. “It’s got absolutely nothing to do with Kilmarnock,”

Gerrard said. “We didn’t punish Jordan Jones, we didn’t give the Kilmarnock player a two-game ban, so why he’s trying to get one of my players banned is a surprise and a disappointment.”

Clarke spent a year as Liverpool’s first-team coach while Gerrard skippered the Reds and the latter says he has never previously had a problem with his Rugby Park counterpart.

“That’s not the type of guy I know Steve Clarke for. He is usually first class, the dealings I had with him as a player when he used to coach me, and since I’ve been at Rangers,” he said.

“So very surprised by his comments and I don’t think there’s any need for them at all.”

Rangers will attempt to keep the pressure on champions Celtic by winning away at Aberdeen on Wednesday evening.

Gerrard has failed in three attempts this season to get a win over Derek McInnes’ team. Rangers are 1.91 to win at Pittodrie, with the Dons priced at 4.00 and the draw 3.50.