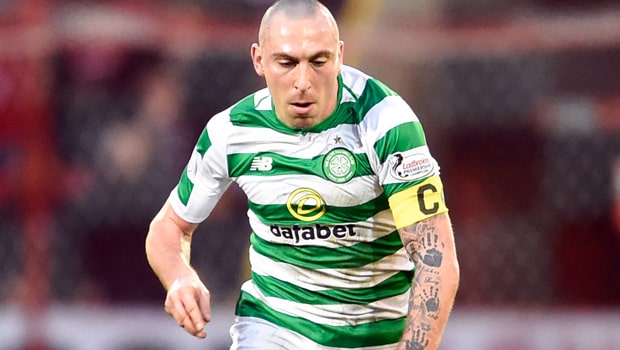 Celtic skipper Scott Brown will not be taking to heart any criticism of his performances or suggestions that he is slowing down.

The 33-year-old extended his stay in Glasgow for a further two years last week, signing a new contract that will result in him finish his playing career with the Parkhead club.

When he was sidelined with injury earlier this season, Brown’s critics were keen to suggest his time in Celtic’s engine room might be coming to a close.

The Hoops skipper admits he has heard it all before, having endured a similar scenario when Rangers beat Celtic in a Scottish Cup semi-final following a penalty shoot-out at Hampden in 2016.

Brendan Rodgers arrived that summer and Brown has since skippered his team to seven straight domestic trophies.

“That puts a smile on my face,” he said when questioned about the gossip around him. “It just makes me go out and work harder to prove to everybody that I can still do it.

“That [2016 semi-final] was three years ago and people were saying my legs had gone. I hadn’t heard it all before as I don’t read [it]. But people walking in the streets told me they’d read in the paper that my legs had fallen off.”

Brown will not be getting upset by trolls on social media, he adds, although he does concede that getting back to full tilt after an injury setback is now that little bit tougher than in years gone by.

“I feel I’m getting back to full fitness now. It takes a bit longer when you get a bit older,” he acknowledged.

“I used to just get chucked into a game after six to eight weeks out and be fine. But it takes that little bit longer to get your sharpness back more than anything.”