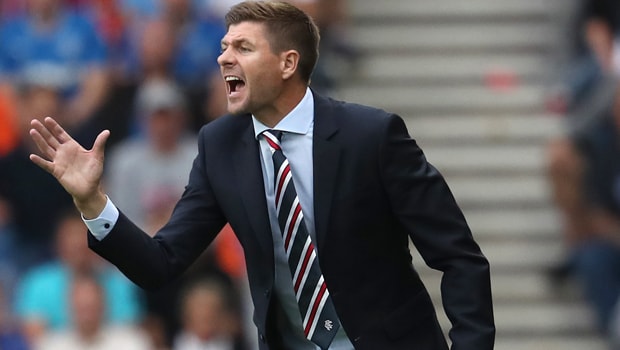 Rangers manager Steven Gerrard says the 2-0 Europa League qualifying win over FC Shkupi at Ibrox was ‘not any better than satisfactory’.

Macedonian minnows Shkupi were the first competitive opponents for the former England and Liverpool skipper as he began his tenure in Glasgow in a first-round qualifier.

The Light Blues were embarrassed at the same stage last summer when Progres Niederkorn of Luxembourg dumped them out, a result that did little for manager Pedro Caixinha and he was eventually sacked a few months later.

That setback arrived following a 1-0 first leg win at Ibrox, so Gerrard will have been relieved to secure some daylight late on against Shkupi.

Jamie Murphy’s first-half strike gave a 50,000 sell-out crowd something to cheer but Rangers had to wait until stoppage time at the end of the game before skipper James Tavernier netted a second from the penalty spot.

For Gerrard, it was no more than Rangers should have achieved and he anticipates a tough evening in Skopje on Tuesday in the return game.

“I think there are a lot of positives to take from the game but one concern would be that we didn’t win the game a lot more comfortably and put the whole tie to bed tonight.

Rangers are 9.00 to win the Scottish Premiership title this season, with Celtic priced at 1.08 to make it eight years of domestic dominance.