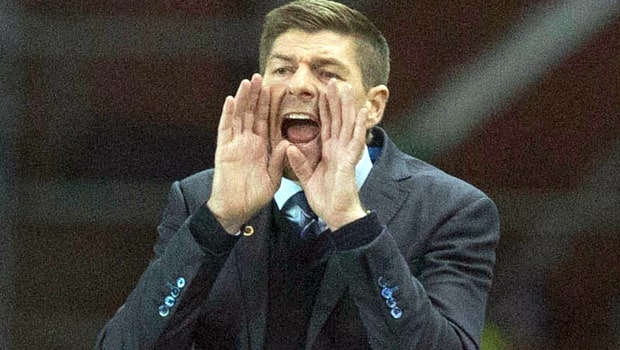 Steven Gerrard felt his side’s 3-1 win over Rapid Vienna in the Europa League was like the ‘Rangers of old’, as he hailed the best performance of his reign so far.

The Light Blues fell behind when Veton Berisha swept the Austrian side in front close to half-time but Alfredo Morelos levelled almost instantly at Ibrox.

The home side dominated after the interval and were rewarded when James Tavernier fired in a penalty after 84 minutes, before Morelos put the gloss on the win with a stoppage time strike.

The victory leaves the Glasgow side top of Group G with four points from two matches, clear of the Rapid Vienna, Villarreal and Spartak Moscow.

Gerrard had no doubts the overall performance was the best he has seen since taking over in the summer.

“That’s the level of performance I’ve been looking for since I came in,” said Gerrard.

Rangers’ unbeaten run in Europe under Gerrard now stretches to 10 games, while they’ll head into Sunday’s Scottish Premiership clash at home to table-topping Hearts on a high.

The importance of finding consistency is not lost on the ex-England captain, but taking out a decent team like Rapid Vienna should instil belief in his team, says Gerrard.

“We should have won the game 3-0. Every single player to a man was outstanding all over the pitch,” he added.

“The challenge for us now is can we find it more consistently. That’s the best 90 minutes we’ve given and we have beaten a very good team. They had good ideas, good players and a good philosophy. We beat a good team.”