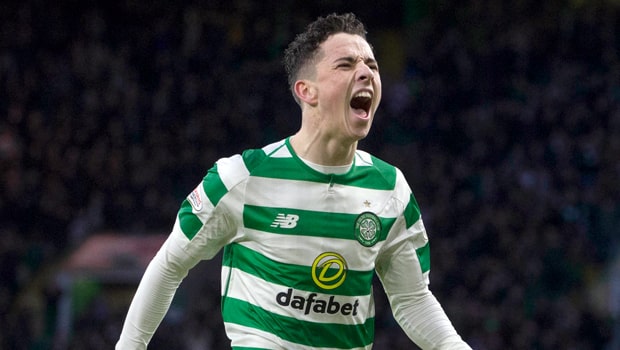 Celtic boss Neil Lennon feels young winger Mikey Johnston is not far away from the first team but must improve his fitness.

The Scotland Under-21 ace is clearly eyeing more game time in the upcoming campaign and has been out to impress the boss during pre-season.

The Hoops have been working out in Austria in an attempt to get up to speed, while they have also been to Switzerland, with a clash against FK Sarajevo next week in the first leg of their Champions League qualifier.

Johnston way part of the team that Lennon fielded against St Gallen’s Under-21’s on Tuesday and, according to his manager, put on a decent display before fatigue took over.

“Mikey will be banging on the door. I’m pleased with him,” he said. “He has been a threat again in Switzerland before he faded.”

Celtic, who are priced at 501 to win the Champions League, travel to the Kosevo City Stadium on July 9 before welcoming the Bosnian outfit to Glasgow on July 17.

It remains to be seen if Johnston is handed a starting berth next week but, with fitness issues surrounding the youngster in the past, it may be that he is on the bench to be used as an impact player later in the contest.

It seems likely that he will see more league action and the men in green and white can be backed at 1.33 to win yet another Scottish title.