Boli Bolingoli-Mbombo in as Celtic look ahead 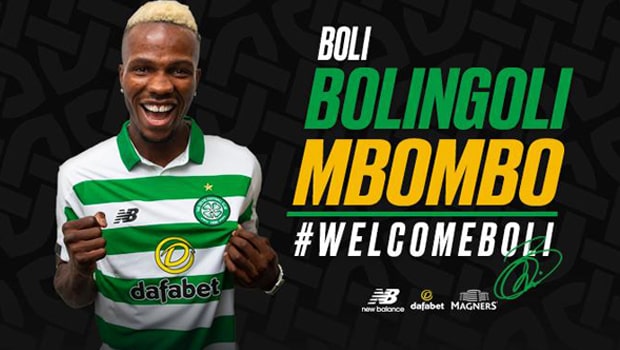 The signing of left-back Boli Bolingoli-Mbombo from Rapid Vienna may mean that Celtic are planning for life after Kieran Tierney.

Mbombo, 24, completed his move to Glasgow on Wednesday, penning a four-year deal with the Hoops for a reported £3m fee. The Belgian arrives with the reputation of being a versatile player, able to operate as a wide player in midfield and as part of the rearguard.

The former Club Brugge ace described himself as a left full-back to Celtic’s official website, meaning Tierney’s days at Celtic Park may be numbered, but the club bill him as someone who “can play in a variety of left-sided roles”.

Tierney has been the subject of interest from Premier League side Arsenal, with the Gunners lodging an unrealistic £15m offer for the Scotland international – thought to be £10m short of what the Bhoys require.

The latest reports claim the north Londoners will return with a bid of £22m for the young defender, but even that might not suit the club’s money men. If he stays or leaves, the Scottish Premiership champions seem to have back-up in the form of Mbombo, who is clearly upbeat about making the move from Austria to Scotland.

“It is a little late but a nice birthday present,” he said. “I heard about it first last week when they had contact with my agent and directly I said yes – you can’t say no to a club like Celtic.

“It is a great opportunity for me to make the next step in my career.” Celtic are priced at 1.33 to win yet another title, with Rangers on offer at 3.20.