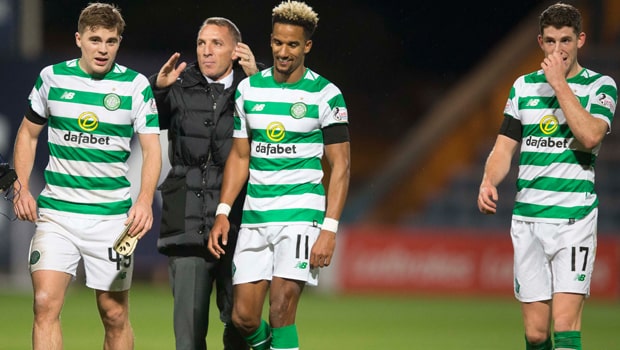 Brendan Rodgers wasn’t aware that Celtic’s 5-0 hammering of Dundee was his 100th win as manager of the Parkhead club.

The Scottish champions moved into second spot behind Hearts – their next opponents – with an easy success at Dens Park against a poor Dundee side.

Celtic, four points behind Hearts with a game in hand, welcome the Jambos on Saturday and Rodgers has quickly pinpointed three points from that game to follow up his personal landmark victory.

“I didn’t know it was my 100th win. Someone just told me there. We should have had more! How many games have I had? 144? How many losses? Twenty-one? That’s too many. I should have won more,” Rodgers told the media.

Manchester City loanee Daniel Arzani impressed during his maiden outing in the Celtic first-team and, while the young Australian left the field on a stretcher, his manager was quite confident the problem wasn’t all that serious.

“Arzani is a great boy and it’s unfortunate he picked up the injury with a run in the game. I think his knee just sort of gave way and he felt it a bit unstable.

“He was taking the applause on the way out, so I’m not sure how sore it was,” Rodgers added.

“The only boy to be on a stretcher on his side. I don’t think it was killing him!”

Celtic beat Hearts 3-0 in the League Cup last Sunday at Murrayfield and are 7.00 to achieve the same scoreline on Saturday.