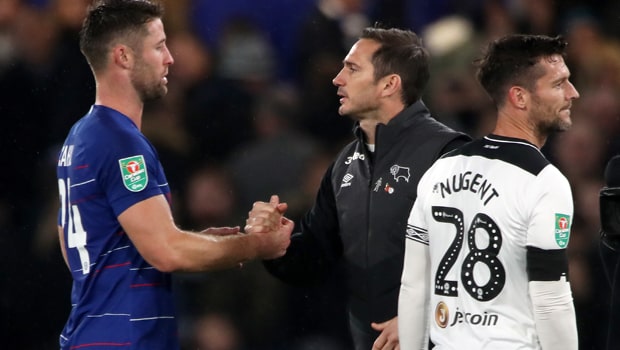 Frank Lampard felt there were plenty of positives to take away from Derby County’s 3-2 Carabao Cup defeat at Chelsea.

Lampard, Chelsea’s all-time leading scorer, returned to Stamford Bridge for the first time as a manager, having left the Blues in 2014 after a 13-year stint that yielded unprecedented success.

Despite twice putting the ball in their own net, Derby responded with first-half goals from Jack Marriott and Martyn Waghorn. Cesc Fabregas eventually scored the winner shortly before the break but Lampard took great belief from the evening.

“We really contributed to the night,” he said.

“This is a Chelsea team that were strong in personnel and of course they were going to have the ball and control elements of the game, but if you look at chances created we had more.

“We gifted them two goals but then we earned ours, and then it was a foul for the third goal. But the pride of the evening overshadows that for me.

Now if we don’t carry that performance into the Championship then it’s our fault.”

Chelsea loanee Fikayo Tomori and experienced defender Richard Keogh both put through their own goal, but Lampard wasn’t about to blame his men.

Replicating their Stamford Bridge effort, as well the performance in winning at Old Trafford in the previous round is the challenge for Derby back in the Championship, where they sit in sixth place after 15 games, just four points off leaders Sheffield United.

“Tomori and Keogh have been outstanding for us all season, so I’ve got no qualms with them because mistakes happen,” he said.

“Two freak ones don’t normally but we showed our character and came back to 2-2.

“There will be recovery for two days and then we get ready for Birmingham. We’ve shown what we can do in recent weeks and there are now standards there for us to keep.

“The Championship is hard and you don’t get anything given to you, but if we play like that then we’ll win games.”

Derby are 3.75 to be promoted this season and the Rams are 10.00 to win the Championship.