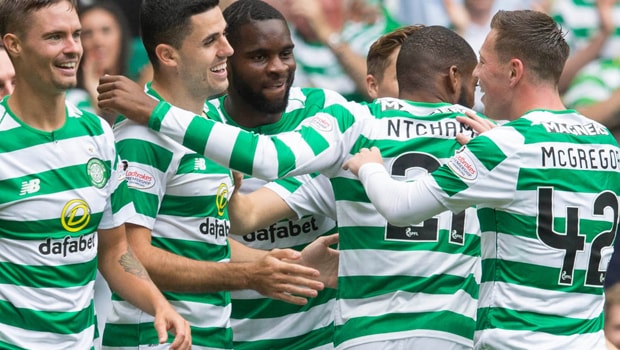 Tom Rogic says it is important Celtic continue to build “momentum” and get everybody up to full speed as quickly as possible following their comfortable season-opening victory against Livingston on Saturday.

Australia international Rogic opened the scoring at Parkhead in the eighth minute with a powerful header before Odsonne Edouard, who joined permanently this summer after an impressive loan spell last season, doubled the advantage in the 26th minute.

Olivier Ntcham added a third from the penalty spot in the second half before Scott Robinson scored a consolation for Livingston with the final touch of the match after some poor defending from the hosts.

It was a positive display from the Hoops and it has kept spirits high ahead of the crucial two-legged Champions League third-round play-off clash against Greek side AEK Athens.

The first leg takes place in Scotland on Wednesday night and Rogic, who signed a new contract with the Scottish champions in May until the summer of 2023, is hoping his side can keep the run going.

“We are in a good place. There are a few boys coming back and it’s an important time of the season for us. We are just trying to build momentum,” he told the club’s official website.

“Qualifying is massive for us but it’s just about keeping that momentum going and keep improving and progressing. Obviously, still early in the season, players still getting up to 100% fitness.

“Every game is important to work on that as a team and all-round. We did that on Saturday. It was disappointing to concede but in most parts it was a great start to the season.”

Celtic are 1.75 favourites to win the first leg, the draw is priced at 3.40, while AEK are 4.75 to take an advantage into the return leg.