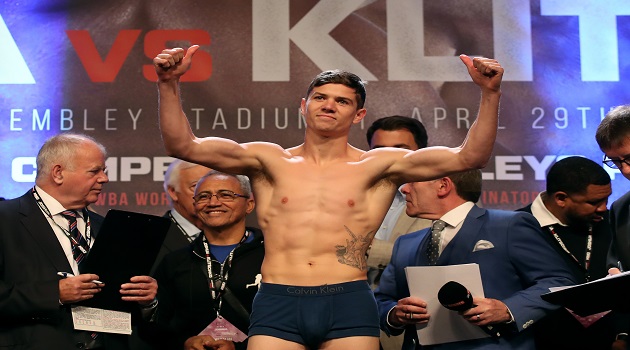 Hull’s Luke Campbell insists he cannot wait to get revenge over Yvan Mendy after it was confirmed he will face him in a final eliminator for the WBC lightweight title.

The pair clashed in 2015 and Campbell was left shocked after Mendy recorded a points win to slow his rival’s momentum. Campbell, an Olympic gold medallist, will now get the chance to wipe the slate clean when he meets the Frenchman on the undercard of Anthony Joshua’s clash with Alexander Povetkin at Wembley Stadium.

Following that first defeat, Campbell has since improved and won seven more fights, although he did lose his only world title shot to Jorge Linares. With the pressure now on and a world title shot on the line, Campbell insists he will have his hand raised after linking up with new trainer Shane McGuigan.

“I want to clear Mendy off my record,” the 30-year-old told Sky Sports. “For reasons that I’ve talked about previously I should have never got in to the ring that night, but what’s done is done, and I can’t wait to right that wrong on my record on fight night.
“Mendy’s always been on my list for sure, he’s been winning and it will be a very tough fight. He is a tough competitor, strong and durable. “I am now a completely different person and a different fighter all-round.

I’m 10 times better than I was when he beat me three-and-a-half years ago. I’m bigger, I’m wiser, my boxing ability is 10 times what it was back then.

“I’ve already struck up a great relationship with Shane and I have no doubt that he is going to take me to the next level. I want to become a world champion and Shane has a proven track record of achieving that with his fighters.”

Another big night of boxing is expected and in the headline bout Povetkin is 8.50 to win via KO, TKO or disqualification.