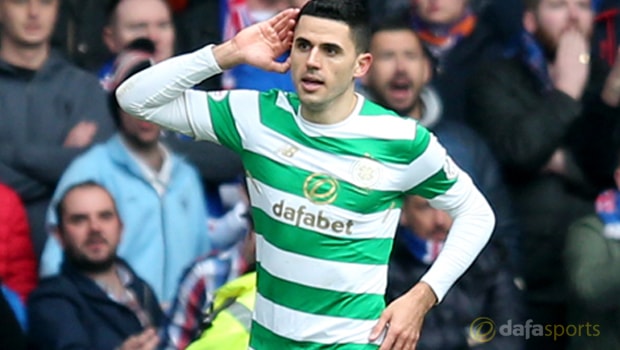 The Australian has only one year left on his deal in Glasgow and has, so far, turned down Celtic’s offer of an extension.

The 25-year-old has been in Glasgow since signing from Central Coast Mariners in his homeland in 2013.

Rogic will have the chance to further showcase his talents this summer with the Socceroos at the World Cup in Russia and he has been touted for a potential move to England’s Premier League.

He netted in Sunday’s 5-0 win over Rangers at Celtic Park, ensuring he has scored in all four Glasgow derbies he has played this season.

Rodgers remains hopeful of keeping the player and the Hoops boss is comfortable about him taking time to make his decision.

“Tom is a brilliant player, but you have to respect that a player’s career is short,” he said.

“Tom has come over here and it has taken five years for him to really establish himself and show his real talents. In the last couple of years, he has been sensational.”

According to Rodgers, there is more to think about that just football for Rogic and his family.

“It’s just a life decision, really. Tom and his wife are from Australia. If you are a Celtic supporter, you probably can’t think of a better place to be in the world than Celtic. But there are warmer and drier places!

“Tom’s a massive talent and we hope we can keep him here. There’s nothing sinister in it.

He’ll take his time and I’ll always support players whatever their decisions are. Hopefully, he can stay and agree a longer term deal.”