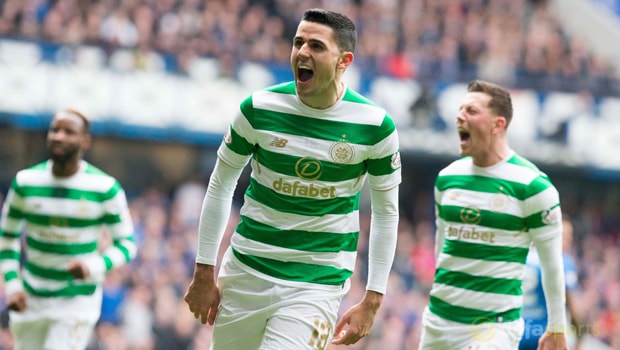 Rogic, who arrived from Central Coast Mariners in 2013, took some time to adapt to Scottish Premiership football and there were reports he could be allowed to leave in the 2014/15 campaign.

But events turned around quickly and the 25-year-old has been a regular first-team fixture over the past three seasons, making 75 league appearances and scoring 20 goals in the process.

The Australian’s performances were said to have caught the eye of several top European clubs and reports suggested at least two Premier League teams were keeping a close eye on his situation.

However, Celtic fans can breathe a sigh of relief after Rogic, who is preparing for the 2018 World Cup in Russia, signed a deal that runs until the summer of 2023.

He told the club’s official website: “I feel great to have signed a new contract.

I’m very proud and honoured to be able to commit my future to the club. I enjoy playing regular football here.

“I’m working under a top-class manager and to play my club football here is something that’s very special to me so I couldn’t be happier to have signed a new contract.

“When you win a single trophy it’s something very special so to have won as many as I have here is another reason why I love it here. I’ll keep working as hard as I can to hopefully create more in the future.”

Celtic take on Motherwell in the Scottish Cup final on Saturday and Rogic has been price boosted to 8.00 with Dafabet to score the first goal at Hampden Park.

The Bhoys are heavy 1.10 favourites to lift the trophy whilst the Steelmen are 6.50 outsiders.