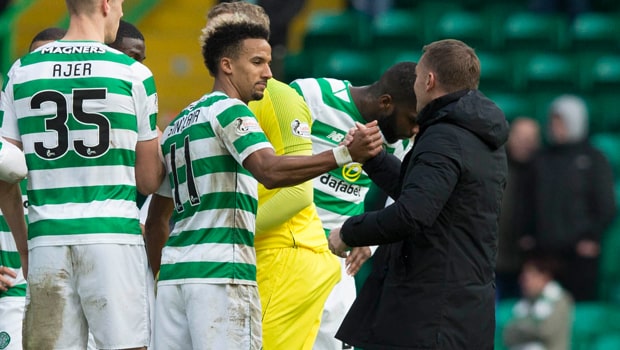 Brendan Rodgers and Celtic continue to rewrite Scottish football’s history books on the back of their 5-0 Scottish Cup win over St Johnstone at Parkhead.

The Bhoys booked their spot in the last-eight of the cup in some style, with Scott Sinclair firing a hat-trick alongside a rare and stunning strike from skipper Scott Brown and a James Forrest effort.

The victory over Saints was Rodgers’ 24th successive cup win with the club, eclipsing the record of 23 that had been set by Walter Smith and his Rangers squad of the early 1990s.

It keeps Celtic firmly on track for a hat-trick of domestic trebles under Rodgers, who has claimed all seven domestic trophies available to him since he succeeded Ronny Deila.

Since losing to Rangers at Ibrox in December, Celtic have gone on to win seven games on the spin. They’ve haven’t conceded a goal so far in 2019 and have scored 21 times in that run.

Alongside Sinclair’s treble, which took his tally to 11 goals in 11 games lately, club captain Brown rocketed home a long-range stunner, his first goal since February 2017.

January signing Oliver Burke impressed with his pace and power in leading the line, while Timothy Weah and Odsonne Edouard made second-half cameos off the bench in a satisfying afternoon for Rodgers.

Losing to Rangers has prompted a sharp response from Celtic according to their manager, who also feels that Burke possesses significant potential having previously been frozen out at West Brom.

“Oliver Burke has huge potential. He’s just getting back used to playing again, but I thought his running ability was frightening really.”

Celtic are in Europa League action on Thursday at home to La Liga outfit Valencia. The Hoops are 3.40 to win that game, with Valencia 2.15 and the draw priced at 3.40.