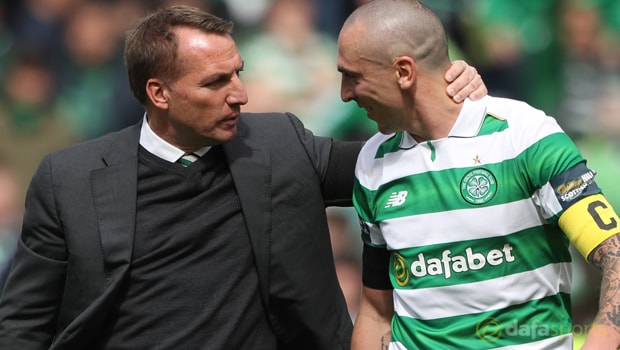 Celtic captain Scott Brown has claimed manager Brendan Rodgers has transformed the team for the better ahead of their trip to Kazakstan to take on FC Astana on Tuesday night.

The Hoops nearly crashed out of the Champions League qualifiers 12 months ago after Astana pushed them all the way.

The two teams drew 1-1 in the first leg before a Moussa Dembele penalty saved their blushes and sent them through.

However, Celtic have practically qualified this time around after winning the first leg 5-0 at Celtic Park last week.

Since their last visit, Celtic have strengthened their squad and won the domestic treble under Rodgers and Brown insists the former Swansea and Liverpool boss deserves all the credit.

He said: “Looking back 12 months, we weren’t that great a team.

“We haven’t made that many changes but the gaffer has brought us together and brought confidence and belief into probably the same players who have been here for three or four seasons.

“It’s the way the gaffer wants players to be, in peak condition all year round. We are a lot fitter than last season.

We came back in better condition, we watched a lot more videos of Astana, how they played and how we can attack them and create chances.

“That’s due to the gaffer and backroom staff who have looked into that. But on behalf of the players, the lads are looking a lot sharper than we probably ever have done.”