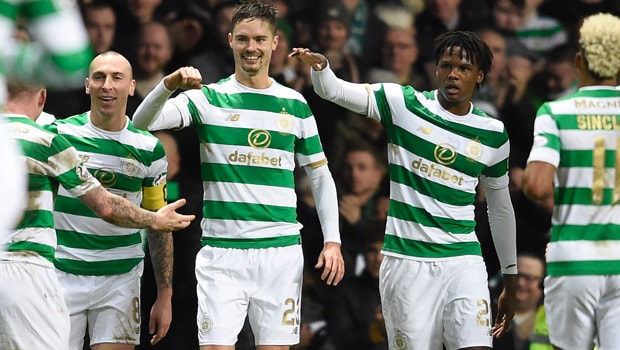 The Belgian defender has apparently agitated to leave Celtic since his involvement in the World Cup this summer.

Boyata missed Celtic’s crucial Champions League qualifiers against AEK Athens, suggesting he was injured, but that notion was shot down quickly by manager Brendan Rodgers.

A move has not materialised and Boyata was back in Rodgers’ starting line-up for Sunday’s clash with Hamilton Accies in Glasgow.

The Hoops were laboured throughout and Boyata duly netted the only goal in the second half to earn the 1-0 win.

Celtic supporters unveiled a banner pre-game that declared Boyata was ‘not fit to wear the jersey’ but skipper Brown is singing from a different hymn sheet.

He revealed he personally had sought a clear-the-air talk with Boyata at Celtic’s Lennoxtown training complex last week.

Off the back of that, the players are happy to stand behind the big defender, something that was evident in their goal celebrations. Brown wasn’t going to reveal the nature of their discussion, however.

“But it cleared the air. Of course it did. We are all together and we are right behind him.

“He wants to play and that’s the main thing. He showed his qualities today – he was outstanding from start to finish and he got his goal to set off a great day for him.”

Celtic are 1.70 to defeat Rangers on Sunday in the Old Firm derby at Parkhead. Steven Gerrard’s side are 5.00 to win, with the draw priced at 4.00.