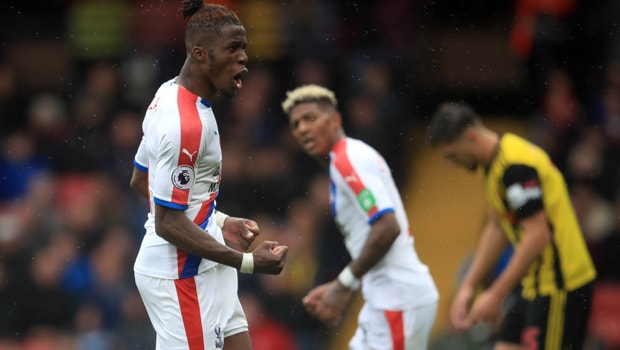 The Eagles attacker was the victim of a crude early challenge from Etienne Capoue, for which the Watford player was lucky to escape a red card.

Capoue appeared to rake his studs down the back of Zaha’s Achilles, though referee Anthony Taylor deemed it worthy only of a caution.

Roberto Pereyra and Jose Holebas scored second half goals as Watford established a strong position, before Zaha scored with 12 minutes left. Hodgson felt his player was clearly effected by the early challenge.

“It definitely affected Wilf,” he said.

“We didn’t see anything like the best of him until late in the game. One can understand that type of challenge affecting him.

“We have to get used to that. Players of his match-winning ability do get targeted. He was targeted by that foul but he got over that and his ending to the game was quite good.”

With the benefit of several television replays post-game, the Palace boss said it was clearly a sending off for Capoue, though he wasn’t willing to lay blame at the referee’s door. “I have only seen it now,” he told Sky Sports after the game.

“Of course, I saw the foul, but you do not see the way he stamped down the back of his calf.

“We were not happy about the foul anyway, but seeing it with the benefit of TV and the clear angles, I would have to say that we were unlucky he was not sent off there.

“But I do not blame the referee for it because sometimes referees see those more as fouls. And I am sure that when he sees it now with the TV, then he would probably agree with us as well.”

Crystal Palace are 2.00 to defeat Southampton at Selhurst Park on Saturday. The Saints are 4.00 while the draw is priced at 3.40.