Scott Bain ready to kick on at Celtic 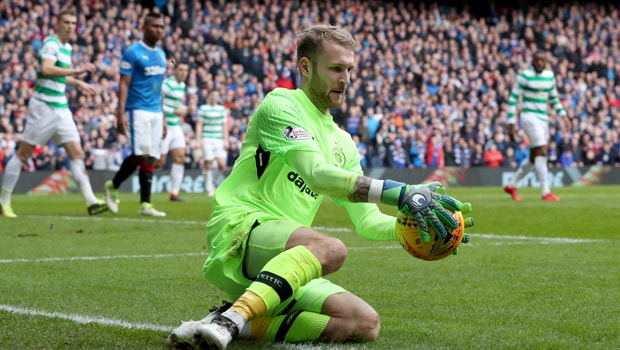 Celtic goalkeeper Scott Bain feels much more settled at the club and is now hoping to push on after his future was resolved this summer.

Bain signed for the Hoops on loan in January from Dundee before the two clubs agreed a deal at the end of the campaign.

The 26-year-old made seven appearances in the Scottish Premiership as Celtic wrapped up the domestic treble under coach Brendan Rodgers.

He was rewarded with a four-year contract and the new Scotland number one is determined to prove his worth next season.

Bain played in a friendly against BW Linz on Tuesday and admits the best is yet to come from him.

He told reporters: “With the contract all sorted, it makes me feel a little more at ease than I was before.

I know I am going to be here for a long time and I have really enjoyed getting back to the levels we had before.

“It did feel a little bit like a trial before. If you make a mistake, you think ‘Who’s watching?’.

I got a few games and last year was great, but now I am here permanently, I feel settled.

“But it’s always a case of improving. It doesn’t matter what your levels are, you always strive to get better.”

Defender Jozo Simunovic is also away with the team in their training camp but he has refused to get too carried away during the first few weeks of the season.

Rodgers’ side will take on Armenian side Alashkert next week as they try to qualify for the Champions League.

Speaking ahead of the game, Simunovic told Celtic TV: “We have to go day by day and game by game, we cannot look too far forward, every next game is the most important and we have to prepare in that way.”