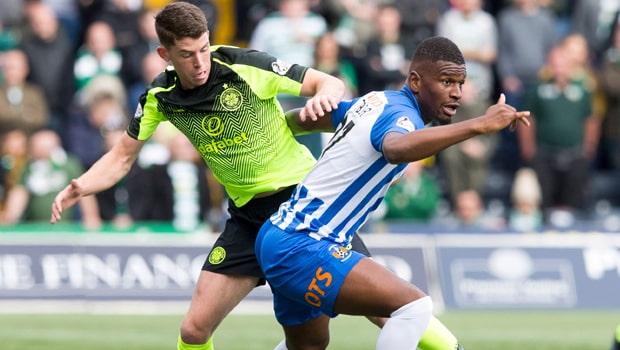 Ryan Christie says no Celtic players are panicking after a 2-1 defeat at Kilmarnock on Sunday and is confident the squad have the quality to get back to the top of their game.

confirmed their worst start to a Ladbrokes Premiership season Celtic went into Sunday’s clash at Rugby Park off the back of a narrow 1-0 home victory over Rosenborg in their Europa League Group B opener on Thursday.

The Hoops were 1-0 ahead at the break courtesy of Leigh Griffiths’ opener but, unlike previous years where the Bhoys would have taken control, they were pegged back as Chris Burke levelled the scores.

Brendan Rodgers’ side have amassed only 10 points from six league games ahead of the Scottish League Cup quarter-final against St Johnstone at McDiarmid Park on Wednesday night, where Christie hopes to get back on track.

“It is just about belief and togetherness. We know we have got that,” he said.

“We are starting to come under a bit of scrutiny, but that is when you start looking to either side of you, at your team-mates and push each other through.

“We have definitely got the ability to do that. We are not exactly panicking or anything like that. We still highly believe that we can push on and get back to the top of our game and we are looking to do that as soon as we can.

“Now we go into the St Johnstone game and we are desperate to put ourselves into a semi-final. Everybody has to be at the top of their game. We have to forget about yesterday, look at it and right the wrongs.

“But most importantly focus on St Johnstone and make sure we come out of that having progressed into the semi-final.”

Celtic are 1.40 favourites to pick up the win at McDiarmid Park, a draw is priced at 4.50 whilst St Johnstone are the 6.50 outsiders.