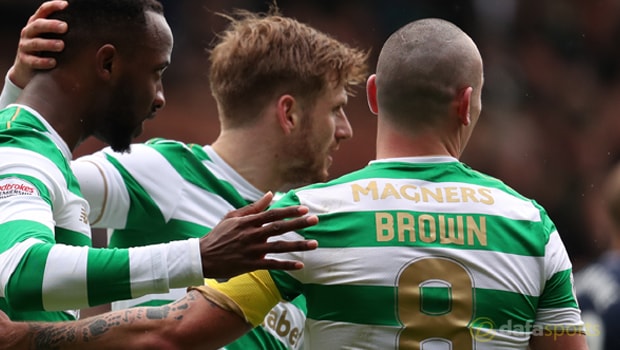 The ex-Republic of Ireland stopper says he expects that either Dembele or Griffiths will perform against Rangers in Sunday’s Scottish Cup semi-final at Hampden Park but he wants them doing the same thing week in, week out.

He told reporters: “To play as a striker for Celtic Football Club, you have to be good all the time and that’s what Moussa Dembele and Leigh Griffiths should be thinking about; how am I going to be remembered as a proper striker for this fantastic club?

“I’m not criticising them. What I’m saying is that they need to be consistently effective.”

Dembele scored a crucial goal in last month’s victory over Rangers at Ibrox in the league, while Griffiths has also shone when given a chance in games against their Glasgow rivals.

Neither player has managed double figures in the Scottish Premiership this season so far however and Bonner says that must be questioned. “Moussa is a young man with brilliant attributes.

For me, though, he has to do it more often,” he added.

“I’ve no doubt that he’ll go out on Sunday and he’ll show his quality again but I want to see him doing that on a regular basis.

“When I look at the goalscoring charts and the top Celtic scorer has nine goals in the league, I question that.

I don’t think that’s ever happened before in a championship-winning Celtic team. How is that happening? “Injury has affected that with Griffiths and Dembele having had spells out but even at that, it still shouldn’t be happening.

I just think for this club you want the big guys, up in those forward positions, to score at least 15 to 20 goals.”