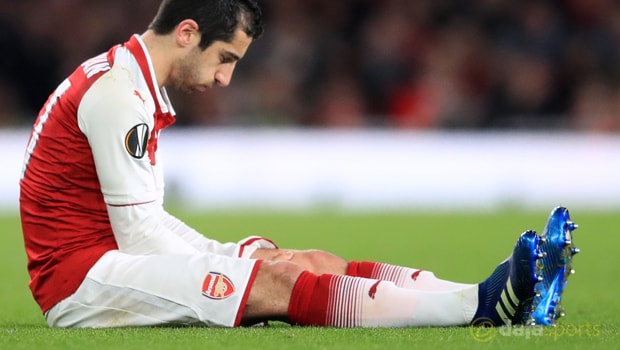 Arsenal manager Arsene Wenger has revealed Henrikh Mkhitaryan will remain on the sidelines for another two weeks with a knee injury, increasing hopes he will be fit to play a part towards the back end of the season.

The Armenia international picked up a knee injury in the first-leg of the Europa League quarter-final against CSKA Moscow and he has been missing for the last two matches.

Initial reports had suggested the 29-year-old, who arrived at the Emirates in January from Manchester United as part of a swap deal involving Alexis Sanchez, could be out for the remainder of the campaign.

However, following Thursday’s 2-2 draw at CSKA, a result that ensured the Gunners progress into the semi-final stage of the competition 6-3 on aggregate, Wenger provided some better news on Mkhitaryan’s recovery.

“He has a medial ligament strain, he should be out for two more weeks,” he said after the match.

“Do not be too worried. We have a very good medical staff and he is very serious in his rehab.”

Arsenal were given a scare during the second leg in Russia, having gone 2-0 down, but goals from Danny Welbeck, who is making a late charge for England’s 2018 World Cup squad, and Aaron Ramsey ensured the Premier League outfit moved into the last four.

Wenger, whose future as manager beyond the summer is still uncertain, is now waiting to find out his opponent for the semi-finals, with Atletico Madrid, who are 2.00 favourites to win the tournament, Marseille and Salzburg in the draw.

The French tactician is also waiting to hear the extent of England international Jack Wilshere’s fixture after the midfielder was forced off in the second half, replaced by defender Calum Chambers.