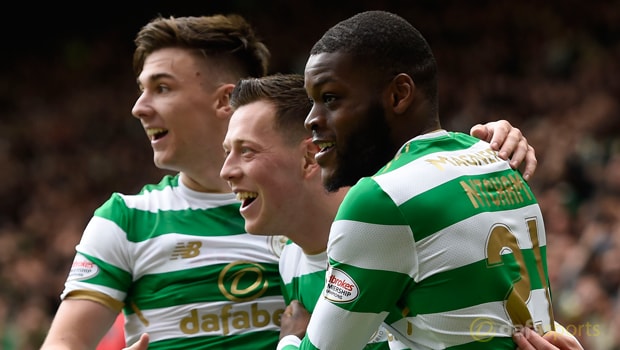 Celtic midfielder Olivier Ntcham says he is enjoying the freedom of expression under Brendan Rodgers and is eager to continue his development over the years to come.

The France Under-21 international joined the Bhoys last summer from Manchester City on a four-year deal for a reported £4.5million after a two-year loan spell at Genoa.

The 22-year-old has become a regular first-team fixture since his arrival, making 29 Scottish Premiership appearances and scoring five goals in the process, helping the club retain the title.

His progression and development has been clear to see and the midfielder will be hoping to earn a hat-trick of trophies this term when Celtic take on Motherwell in the Scottish Cup final on Saturday.

Ntcham, who has reportedly been linked with clubs across Europe over a potential summer move, has praised the influence of Northern Irish boss Rodgers and is aiming to keep kicking-on in his career.

He said: “As a player, I am developing a lot. I am more aggressive, more concentrated. He (Rodgers) is very important. He gave me the chance to express myself on the pitch.

“Even when you miss, he is behind you to say ‘try again’ and, as a player, it is very nice to have a manager like this.

The difference between him and the other ones is that he lets me express myself on the park, that is the difference.

“It suits me as a player and I am enjoying my football a lot.”

There are several price boosts available with Dafabet for Saturday’s Scottish Cup final and Celtic are now 9.00 to win 3-0, while it is 13.00 for the Bhoys to clinch a 3-1 victory.

Stuart Armstrong has also been boosted to 12.00 to score the first goal while his team-mate Tom Rogic is 8.00 to open the scoring.