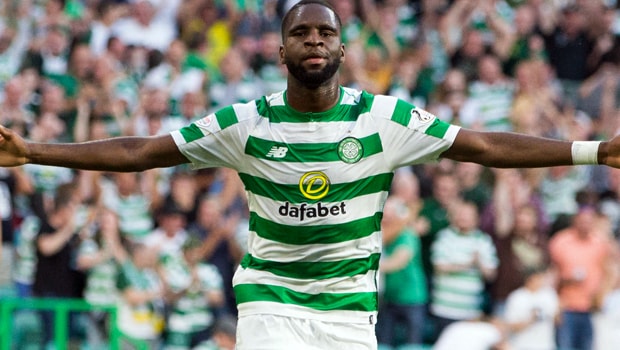 The French duo could form a lethal partnership for Brendan Rodgers in the coming months, perhaps the most exciting since Martin O’Neill paired Henrik Larsson with Chris Sutton in the early noughties.

Dembele missed this week’s Champions League qualifier with Rosenborg at Parkhead with a hamstring problem.

In his absence, Edouard, the club’s £9m record-signing from Paris St-Germain this summer, took centre stage in a 3-1 success.

He levelled in the first half after the Norwegians had forged ahead and, with another Frenchman Olivier Ntcham having edged Celtic ahead after half-time, the striker lifted a deft finish into the Rosenborg net 15 minutes from the end to give Celtic a clear advantage going to Trondheim for the second leg.

Hay was impressed and while Dembele became a big hit with the Celtic supporters in his first during 2016/17, he now feels Edouard has got just as much potential as his compatriot to be a star in Glasgow.

“I never thought I would be saying this, but I think Odsonne Edouard is going to turn out to be an even better prospect than Moussa Dembele,” Hay told the Evening Times.

“I am a massive fan of Dembele and have been ever since he arrived at Celtic. He is already a star and will go on to achieve great things in the game I’m sure.

“Dembele has got pace and power, but Edouard showed all the qualities of a top, top striker against Rosenborg.

He too has got pace and power, he’s got conviction, and as his two finishes on the night amply demonstrated, he has got composure in his finishing.”

Celtic are 1.10 to retain the Scottish Premiership title this season, with Steven Gerrard’s Rangers priced at 9.00 to half the quest for eight-in-a-row.