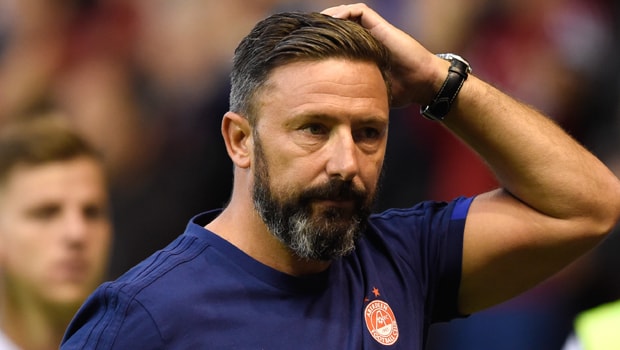 Manager Derek McInnes feels Aberdeen are still well in their Europa League second round qualifier with Burnley after Thursday’s 1-1 draw at Pittodrie.

In a match dubbed the ‘Battle of Britain’, it seemed as though the Scots would claim the spoils in the opening encounter when they took the lead through a Gary Mackay-Steven penalty on 19 minutes.

Despite enjoying plenty of possession, the Clarets, priced at 101.0 to win the Europa League, failed to find a way through until Sam Vokes struck with 10 minutes to go to ensure that it is all to play for in Lancashire next week.

With an away goal to their credit and what is sure to be vociferous home support behind them, Sean Dyche’s side are strong favourites to finish the job on home soil next Thursday.

However, McInnes has made it clear that his charges will not be throwing in the towel and can ruffle a few Burnley feathers.

“There’s a feeling we can score down there, we created enough good moments to suggest that,” he said.

“If we score there it’s game on.” The Dons began the game well and put pressure on the English side but they began to run out of steam in the last quarter.

That took its toll as the visitors equalised, with Aberdeen needing to score in the return leg or face elimination from the competition.

McInnes is not fazed by the task ahead and has backed his stars to take the game to the opposition.

“The players have the confidence and personality to take the challenge on of trying to win the game at Turf Moor,” he added.

Dyche will have to keep one eye on the Premier League during his side’s Europa league run should they make the group stage as many teams have suffered domestically when in Europe’s second-tier competition.

Burnley finished seventh last term but are 4.5 to be relegated.