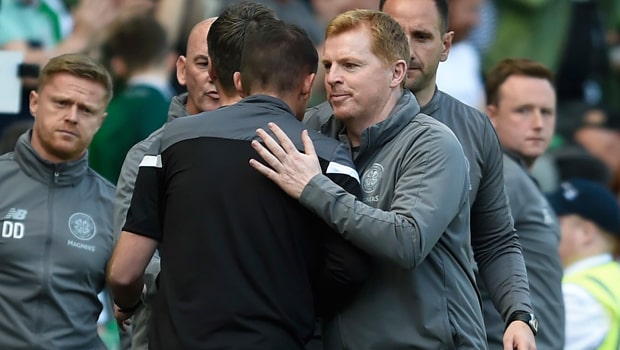 Neil Lennon warned his misfiring Celtic squad that the ‘holidays aren’t here yet’ following their disappointing 0-0 draw with Hibernian at Easter Road on Sunday.

The champions-elect delivered an insipid performance in Edinburgh against Lennon’s former club.

It leaves them nine points ahead of Rangers with only four games left to play as Celtic bid to close out eight-in-a-row, but Lennon has warned his players they need to get back to basics.

Celtic can win their eighth consecutive Scottish title next weekend if they beat Kilmarnock at home on Saturday and then their nearest challenges Rangers fail to defeat Aberdeen at Ibrox the following day.

“We are going for the title, the holidays aren’t here yet. Forget about the noise out there – ‘you can win it here, you can win it there’.

You’ve got to win the games and that’s what is angering me at the moment,” said the interim boss.

“We are up and down at the minute and the attitude of some of the players is not making me happy. I’ve told them what I expect from here on in.”

Lennon went on to suggest that ‘simple, basic decision making was not there’ against Hibs.

Following a stalemate at home against Livingston last week, it is two games without a goal and the Parkhead side have perhaps taken their eye off the ball, says Lennon. He doesn’t expect it will prove fatal, but he wants it ended fast.

“Maybe it is the general consensus out there [that Celtic have won the league]. But we are dictating our own destiny here and we have to dictate it a little bit better than we have in the last two league games. That’s it,” he added.

“We are not there yet. I believe eventually we will get there. We don’t want to run before we can walk, but we have to approach the games with a better tempo. But I’m not getting panicky, I’m not getting anxious about anything.”