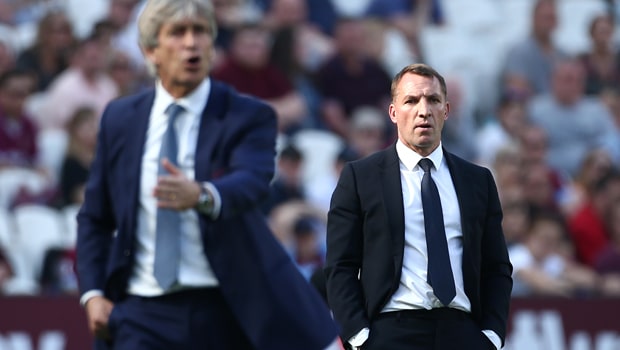 Brendan Rodgers is happy with the strong mentality and ability his Leicester City players are showing to dig out late results.

Harvey Barnes scored a stoppage-time leveller in Saturday’s 2-2 draw with West Ham at London Stadium as the Foxes twice came from behind to force a point.

“It’s one which we’ve tried to promote with the players, that you’ve got to keep going for 90 minutes, no matter what the score is,” said Rodgers.

“That’s always the mark of good teams and again we scored another late goal which shows that fitness and mentality of the team. That’s always important in a good team.”

Rodgers was pleased with the improvements Leicester made in the second half after what he admitted was a ‘passive’ performance in the opening 45 minutes against Manuel Pellegrini’s team.

The players were able to take on board what they were told at half-time and Rodgers felt the second period reflected that.

“In the first half, we were too passive, but in the second half, we played with a lot more energy and a lot more tempo to our game and we looked a real attacking threat,” he added.

“I think we’re going to get that from time to time – especially with so many young players coming away and playing against a good team.

“They’re a team that’s got a good record at home, but that was much more like us in the second half. We looked at it at half-time, addressed the issues, and it’s good to get that reaction.”

Leicester are 2.40 to defeat Arsenal next Sunday at King Power Stadium. The Gunners are 2.40 favourites while the draw is 3.60.