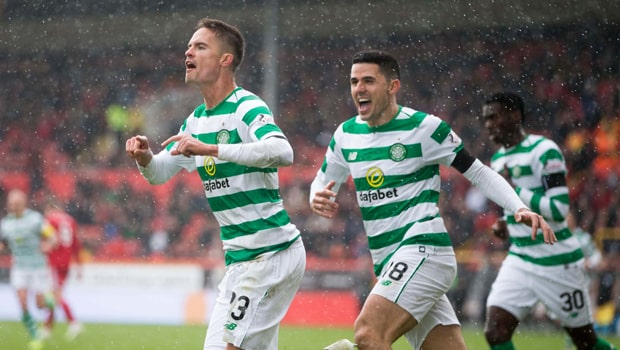 Neil Lennon says Mikael Lustig is a Celtic ‘great’ and he hopes the defender remains with the club beyond the end of the season.

Lustig is out of contract in the summer and it seemed as if this season may have been his last with the Glasgow giants earlier in the campaign as he found himself in a bit-part role under Brendan Rodgers.

The Sweden international has re-established himself as a key figure under Lennon, however, and scored the opener at the weekend as Celtic clinched an eight successive title with a 3-0 win at Aberdeen.

“He is right up there in terms of great players at the club, isn’t he?” Lennon told the Daily Record.

He added: “He’s won trebles, he’s been a Swedish international for a long time and has played at World Cups and the Euros. It was a fantastic piece of business for the club.

“I had to get his head back in place a little bit when I came in. He was maybe looking elsewhere and we wanted to get him back into the team.

“It was a brilliant goal from him at Pittodrie – a brilliant ball from Callum McGregor and a great run and header from Mika.

“I know what he can do. I know the personality of the player. He is very important in the dressing room.”

Lennon’s own future remains unclear as he was appointed on an interim basis until the end of the season after Rodgers moved to Leicester.

If the Northern Irishman is handed the chance to manage Celtic on a permanent basis for a second spell, it seems as if he will make tying Lustig down to a fresh deal a priority.

He added: “There is a player who has now won eight titles. That says it all. He is still contributing immensely to what we want to do here.

He’s a brilliant player and a brilliant boy. “I would like to keep him. Mika will know more about his role as he gets older but as a player he is very important to what has been done here over the last eight years.”