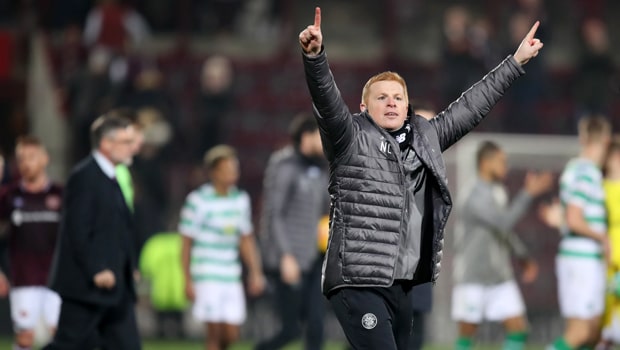 Neil Lennon felt Odsonne Edouard’s last-gasp strike in a 2-1 win for Celtic at Hearts on Wednesday evening was a “psychologically huge” moment for the squad.

Lennon was back in the Celtic dugout for the trip to Tynecastle, having been appointed interim boss in the wake of Brendan Rodgers’ sudden defection to Leicester City just 24 hours previously.

The Hoops went in front through a superb counter-attacking goal from James Forrest and appeared to be in cruise control when Hearts had Jamie Brandon sent off just before half-time.

They tossed the Jambos a lifeline early in the second half when a mix-up between Scott Bain and Kristoffer Ajer resulted in a penalty, which Oliver Bozanic slotted home.

Celtic probed for a winner in the final 30 minutes but Craig Levein’s side were organised and appeared set to claim a deserved share of the spoils before substitute Edouard got on the end of a cross from skipper Scott Brown to claim all three points for the champions.

It ensured Celtic stayed eight points ahead of Rangers, impressive 4-0 winners against Hamilton on Wednesday, and, given the upheaval this week of losing their manager, Lennon suggested it was a significant turn of events for the eight-in-a-row seeking Bhoys.

“You never stop believing with this group that they might make something happen. I can’t knock the players.

The mentality is absolutely brilliant and I can’t fault them. It’s a brilliant win and psychologically huge,” said Lennon, who previously won three league titles in his first spell as Celtic boss.

Though he admitted there were some facets of the performances, including the build-up to the Hearts goal, that needed addressing, Lennon was not in a mood to have a pop at a group of players that gone through the mill in the previous 48 hours.

“I’m not going to be critical of the team tonight. It’s been a really difficult couple of days for them. They lost Brendan then there was a quick turnaround. That’s not easy for them. They covered themselves in glory again,” he added.

“I only met them as a group an hour before we left for the hotel. They’re alright now, they’re in good spirits now, so I’m delighted.” Next up for Lennon and Celtic is Saturday’s Scottish Cup quarter-final away at his former club Hibernian.