Posted by Olumide Akinnifesi on October 27, 2019 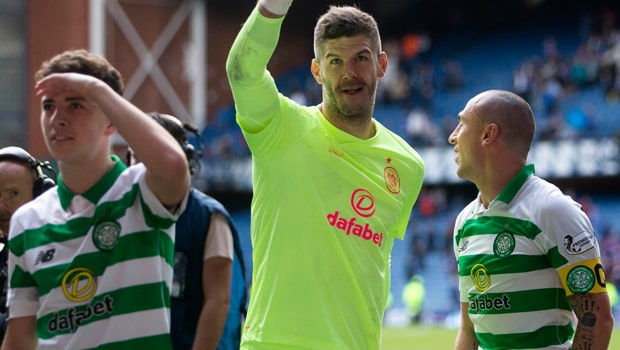 Celtic manager Neil Lennon has discussed the possibility of signing the on-loan Fraser Forster permanently at Parkhead. The England international has been resuscitating his career in the Scottish league this season.

Forster has been the man between the sticks for the Club this season since Celtic knocked AIK out of the Europa League playoffs.

Although Forster looked suspicious and shaky in goal for Lazio’s opening goal on Thursday night, he later stood his ground when he denied the efforts of Marco Parolo and Danilo Cataldi. It kept Celtic to maintain the lead, and it helped his nervousness, which started earlier on in the game.

English Premier League side still owns Forster Southampton. He was signed from Celtic for £10m in 2014. And according to reports, Lennon is contemplating whether to sign him permanently or not. When quizzed on the reports, he said; we are not close to pulling that off yet. There are a lot of factors behind it. We are appreciative of the fact that Southampton agreed to loan him to us. But it all depends on what the player wants and what Southampton wants too”.

” We are aware of the player’s interest to join us — an after Scott Bain’s injury, which will keep him out for two months. We wanted a top one, and we got a top goalkeeper”.

Taking a look at this situation, this looks like a deal that will interest both parties, Forster is hungry and ready to play, and there is no possibility that he will take over the likes of Angus Gunn and Alex McCarthy. But if Forster gets back to top form, he will have his place back at Southampton.

Forster loves his loan Club Celtic and is ready to give his all. But a permanent deal could be tricky. There will be a lot of convincing to do if the contract is to completed permanently. But according to Lennon, it far away from being done.

Celtic FC are strongly fancied at 1.40 to win the Scottish Premiership. while bitter rivals Rangers FC are priced at 2.75