10-man Fulham escape with a draw against Middlesbrough

Posted by Ayotunde Omolayole on October 27, 2019 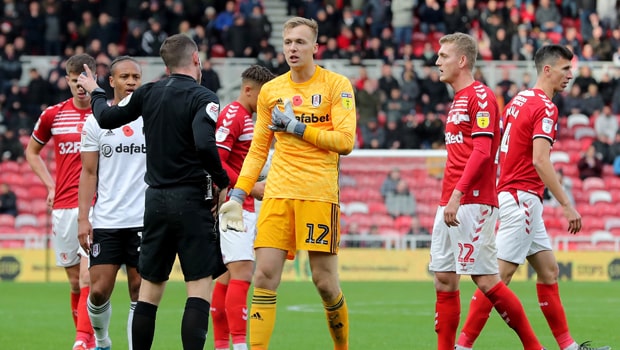 English Championship side Fulham FC held Middlesbrough FC to a 0-0 draw in a week 14 match played at the Riverside Stadium on Saturday 26th of October.

This was Fulham’s fifth draw of the league campaign coming after their win in midweek when they defeated Luton Town FC 3- 2. The draw also left the Cottagers 5th on the league table with 23 points four Points behind League leaders West Bromwich Albion FC. The results ensured that the West London side remained in the playoff spots.

Fulham will count themselves lucky to have left North England with a draw considering the manner they started the game. Fulham started the match brightly, but things went bad for the promotion-chasing side when goalkeeper Marek Rodak was sent off in the 17th minute of the match.

The Slovakian was adjudged to have deliberately handled the ball outside the 18-yard box while trying to prevent Middlesbrough player Jonny Howson from flicking the ball over his head after the goalkeeper misjudged the flight of the ball and rushed out prematurely. Fulham coach Scott Parker had to reshuffle the pack quickly. Midfielder Josh Onomah was the unfortunate player to make a way when Fresh goalkeeper Marcus Bettinelli came into man the Fulham Post.

The sending-off gave the home team the impetus to attack Fulham, who were initially dominating the early minutes of the match. Middlesbrough, who unfortunately has one of the poorest goal scoring statistics in the League, could not make the one-man advantage count against the visitors from London.

Middlesbrough manager Jonathan Woodgate was left disappointed after his players failed to trouble the Fulham defence consistently. On the rare occasion when the home team’s attackers got behind the Fulham defence, the Strikers were unable to capitalize on it.

Despite going down to 10 men, the London side still offered a threat going forward. Fulham captain Tom Cairney saw his speculative shot go over the opposition bar. Midweek hattrick hero Aleksandar Mitrovic could only fire blanks as the away side held on to claim a precious away point.

Fulham’s next game will be at home against Hull City FC on the 2nd of November 2019.

Fulham are backed at1.62 to defeat Hull City, while Hull are available at 5.19 to win Fulham.