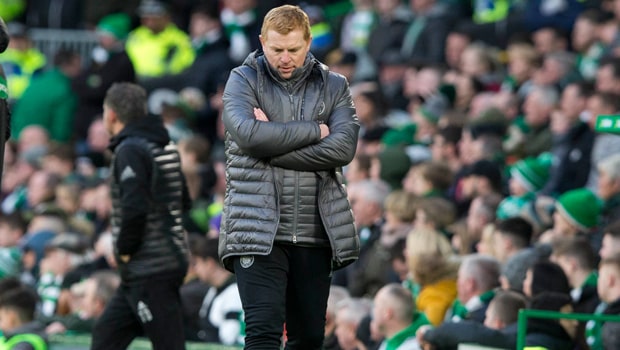 Neil Lennon was in no mood to criticise Celtic after a scoreless draw at home to Aberdeen, though he did suggest some of his players are ‘running on fumes’.

Lennon’s first home game since returning to the club ended in stalemate against a stubborn Dons side.

Despite the frustrating draw, Celtic re-established their eight-point lead at the top of the table, with nine league games remaining, after Rangers had been held 1-1 at Hibernian on Friday night.

Lennon had managed back-to-back league and cup wins last week away at Hearts and Hibs but he suggested there was always likely to be a comedown moment for Celtic given the upheaval created by Brendan Rodgers’ leaving.

“I’d have loved to have won the game and been 10 points clear,” he said.

“But you can’t have everything and they gave me everything so I’m not going to whip them for that performance. “It’s totally understandable. I understand the psychology of a player – a long time ago I was a player myself.

Celtic are in a strong position to claim their eighth Scottish Premiership title on the trot, while Lennon can also look forward to facing either Aberdeen or Rangers in a Scottish Cup semi-final next month at Hampden Park.

With likes of Callum McGregor, Tom Rogic and Olivier Ntcham missing from his midfield, Lennon concedes that his squad is stretched.

He did though pay tribute to skipper Scott Brown and Nir Bitton for their midfield performances on Saturday. “Any team would miss the players we have out,” he added.

“Some of them are running on fumes. The squad’s decimated with injuries at the minute and hopefully we’ll get a few more bodies back and some quality players to add to what we already have.”