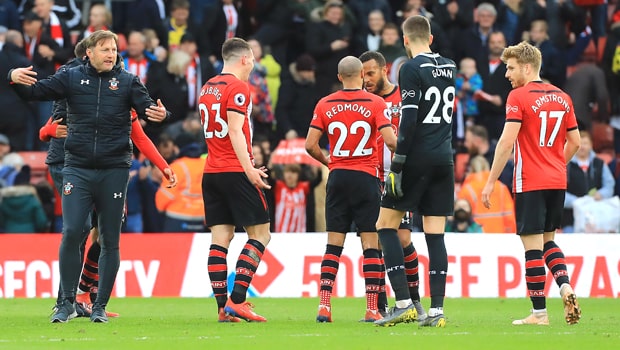 The importance of a 2-1 come-from-behind win over Tottenham wasn’t wasted on Southampton boss Ralph Hasenhuttl.

Harry Kane’s 200th career goal was just reward for Tottenham as they led at the break having dominated proceedings at St Mary’s.

Mauricio Pochettino’s outfit failed to kill off his old club however and a defensive howler from Danny Rose gifted Yan Valery the chance to level with 14 minutes left on the clock.

The red-hot James Ward-Prowse then curled home a sensational free-kick five minutes later to set up a vital Southampton success.

They had started the day one spot above the relegation zone but ended in 16th, leapfrogging Burnley – who visit Liverpool on Sunday – on goal difference.

With wins also coming from fellow strugglers Cardiff and Brighton on Saturday, Southampton’s success was a timely one and Hasenhuttl praised his team for staying in the game.

“The opponents are always winning but this is only a step. It is a big win for us and we have a three weeks’ break, it is a completely different feeling above the relegation line. We need more wins in the last eight games,” he said.

Only club icon Matt Le Tissier (7) has scored more direct free-kick goals for Southampton in the Premier League than Ward-Prowse, who now has four. His manager knows what a threat he presents from a dead ball.

“We had more pressure on the counter press [in the second half] and [Spurs] got a little bit nervous,” he added.

“They tried to play football but it did not work like the first half. The two goals were fantastic.

“What a massive free-kick from James Ward-Prowse, the keeper had no chance. You know he is dangerous and has a big chance to score.”

Southampton are now 12.00 to be relegated following their latest win.